Home Alumni A woman of firsts

A woman of firsts

Elaine Graham Estes, BN’53, has achieved much more than she ever expected, and it all started at Drake at the tender age of 16. She came to cultivate her curious mind, but her solid work ethic and willingness to dive into new experiences also led her to some notable firsts.

The Springfield, Missouri, native first visited campus with her parents in 1949 as she was weighing both Drake and Sarah Lawrence College. The latter would have put her too far from home, she decided, and Drake’s College of Business and Public Administration’s sterling reputation sealed the decision.

Estes planned to live in a dormitory, both for safety and for the experience of on-campus living. But when she sat down with the dean of women, she learned that Drake’s on-campus housing had not yet been integrated.

“This was all totally unexpected,” remembers Estes.

She was not the only African American applicant for on-campus housing at the time, and the board of trustees ruled to integrate. Estes moved into Morehouse—then the Women’s Dormitory—in the fall. Along with Johnnie Lockett, FA’53, and Hetercene Turner, DV‘50, she is credited with integrating Drake’s dormitories.

After that initial bump, Estes thrived at Drake. She graduated in 1953 with a bachelor of science in business administration in the area of retailing, returning to Drake in 1956 for a teaching certificate. A senior practicum at Younker’s department store led to a job with the retailer, but Estes was soon hired away by the Des Moines Public Library, where she worked for 39 years, rising to all of the opportunities offered to her. This included a promotion to director of the library.

“I feel like I have a responsibility to make the best of each situation,” Estes says. “If I’m designated to do something or receive an a 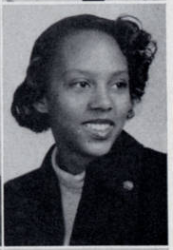 ppointment, I do the very best of my ability.”

Again, Estes blazed a new trail, becoming the first African American executive director at the library and the first woman to hold the position in 50 years. She remained director for 19 years until she retired.

Although Estes is no longer working, she is as busy as ever. She has traveled to over 90 countries and to all seven continents—even Antarctica. She helped found the Ray Society at Drake and is an active member. Her involvements with the Des Moines Art Center, the Des Moines Historic Preservation Commission, and the Des Moines Rotary Club, to which she was the first woman inducted, also keep her active in the community. And in November 2016, she was named one of dsm magazine’s “Sages Over 70” for a life spent elevating the arts, education, and books; serving and championing the African-American community; and shattering barriers.

Yet she still makes time to connect with Drake. Estes was awarded the Distinguished Alumni Award in 1979 and, even now, can be spotted around campus on her way to lectures and events. She recently lent more than 200 publications from her vast, eclectic collection to students in Associate Professor of Art History Lenore Metrick-Chen’s Art and Public Interfaces course, and attended the opening of their resulting exhibit last December.