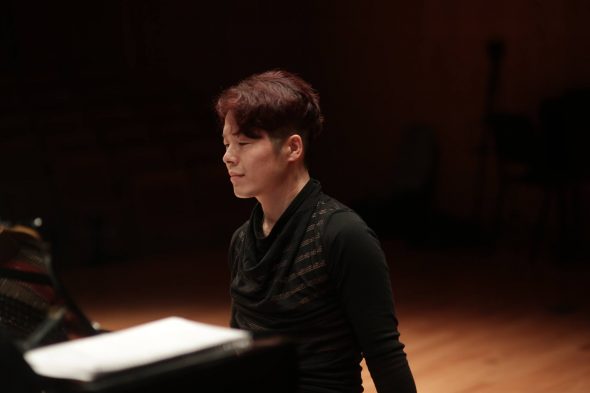 UPDATE: The Jan. 23 performance and Jan. 22 masterclass by Quentin Kim have been cancelled due to an illness. We apologize for any inconvenience.

Quentin Kim, professor of piano at Pusan National University, will present the next concert of Drake University’s Keys to Excellence Piano Series. The free concert is at 7:30 p.m. Monday, Jan. 23 at 7:30 p.m. in Sheslow Auditorium, featuring the following selections:

Professor Kim will also present a public masterclass on Sunday, January 22 at 2:00 p.m. in Sheslow Auditorium. All are welcome to attend.

Pianist Quentin Kim has been hailed by New York Concert Review as an “inspiring…thoughtful musician” through whom music sounds “completely new, modern in the best sense of the word, as if freshly created.”

The media reception of Mr. Kim’s solo albums (Blue Griffin Recording) has been enthusiastic: American Record Guide praised his “warmth that is always engaging” and “extraordinary range of emotion and color” (on the debut album “Romantic Tales”), and Audiophile Audition called him an “interpreter of taste and imaginative fancy, one whose poetry remains just as capable of colossal but humane ferocity” (on the recent release “The Sonata Album”).

Equally known as a composer of aestheticism and emotional sincerity, Quentin Kim’s works have been heard at the Kennedy Center and Berlin Philharmoniker Kammersaal, among other major concert halls of the world.  Deemed “refreshingly direct” and “worthy of repeated hearings” (American Record Guide), his music has won the favor of the public, musicians and critics alike.

Quentin Kim was the Composer-in-Residence of the Korea Concert Society in Washington, D.C. in both 2012 and 2013.  Recently pianist Nathan Carterette has recorded his composition album “Quentin Kim: Solo Piano Works, vol. 1,” released by the Unique Piece Records.

The series is supported by Yamaha, West Music, Civic Music Association, and Drake University. For more information, contact Nicholas Roth at 515-321-5947 or nicholas.roth@drake.edu.

New facilities provide a view to the future