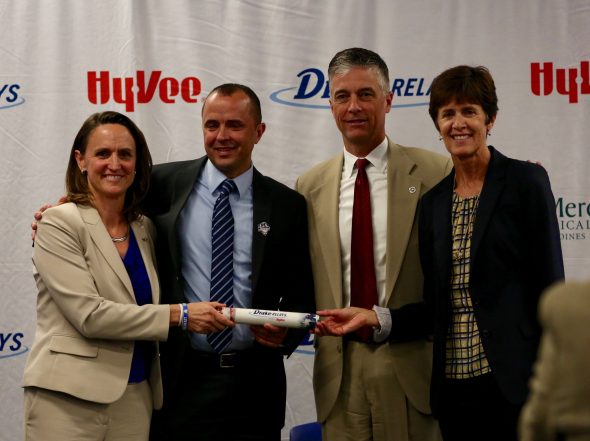 Drake University director of athletics Sandy Hatfield Clubb has announced the hiring of Blake Boldon as the 12th Franklin ‘Pitch’ Johnson Director of the Drake Relays presented by Hy-Vee. Boldon will be introduced during a press conference held in the Courtside Club of the Shivers Basketball Practice Facility at 11 a.m. Wednesday, Oct. 12.

Boldon, a native of Osceola, Iowa, currently serves as the executive director of the Indianapolis Monumental Marathon and has an extensive background and record of success as a competitive athlete, collegiate coach, and event director.

In addition to Boldon’s familiarity with the Drake Relays presented by Hy-Vee, his experience at Beyond Monumental and the Indianapolis Monumental Marathon presented the unique qualifications Hatfield Clubb was looking for in selecting the 12th Franklin ‘Pitch’ Johnson Director of the Relays.

“Blake is the perfect candidate at the right time who has a personal and passionate history with the Drake Relays presented by Hy-Vee,” Hatfield Clubb said. “His extensive knowledge of and passion for track and field, coupled with his experience leading major events make him uniquely qualified for the position. However, it is his demonstrated integrity and his undeniable commitment to excellence that stand out. I have had the opportunity to see and have been incredibly impressed by Blake’s deep dedication to his work as well his admiration for the people he works with at Beyond Monumental. I very much look forward to working with Blake as we enter a new era with the Drake Relays presented by Hy-Vee.”

In his previous role, Boldon has transformed the Indianapolis Monumental Marathon (IMM) and its associated races within the Beyond Monumental organization into one of the premier road racing events in the nation over the last four years. Overseeing a budget of nearly $2 million, Boldon has propelled the event from the 60th largest marathon in the country to the 20th. That growth rate was the third largest nationally for a marathon and the largest for a half marathon. His leadership has resulted in the IMM setting annual revenue records and a 100 percent growth in sponsorships while also making the IMM an agent of change in the Indianapolis community. In addition to strengthening the existing lineup of events, Boldon created the Monumental Mile in 2014 that was ranked by Shape Magazine as one of the top 10 1-mile road races in the nation alongside with Des Moines’ Grand Blue Mile.

“The Drake Relays serves not only as one of the nation’s most celebrated high school, intercollegiate, and elite track and field event, but also as a university-wide celebration for the Drake community and an important cultural event and economic driver for Des Moines and the Midwest,” said Drake University President Marty Martin. “This legacy as America’s Athletic Classic has been carefully cultivated over more than a century, most recently under the exceptional leadership of Brian Brown and with the robust support of Hy-Vee. I am confident that Blake Boldon has the leadership experience, logistical expertise, and creative vision to carry this legacy forward.”

Before taking the reins of the Indianapolis Monumental Marathon, Boldon spent two years at the University of Pennsylvania as the Quakers’ head cross country coach and track and field distance coach. While managing every aspect of a successful Division I cross country program, he was also involved in the planning and execution of the Penn Relays and coordinated the Penn Relays Men’s Olympic Development Mile.

As an Iowan and competitive athlete, Boldon is extremely familiar with Drake Stadium and the iconic Blue Oval, where he won the 3A state title in the 1,600 meters in 1998. As a collegian at Missouri State, he won five Missouri Valley Conference titles and a Drake Relays title in the 1,500 meters in 2003. Boldon graduated from Missouri State with a degree in education in 2003 and was named MSU’s Outstanding Male Athlete Award winner in addition to being a first-team CoSIDA Academic All-American.

Boldon also competed professionally, returning to the Drake Stadium many times. In 2007, he became just the third Iowan to run a sub 4-minute mile and finished second at the Drake Relays that same year to American record holder, Alan Webb, who shattered the Drake Stadium record with a 3:51.71 finish in that classic race. Boldon’s professional career also include four top 10 finishes at USATF Championships.

Boldon assumes the role of Franklin ‘Pitch’ Johnson Director of the Drake Relays from Brian Brown, who recently completed an 11-year tenure directing the iconic event. In 2016, the Drake Relays presented by Hy-Vee saw more than 40,000 fans witness some of the finest professional, collegiate, and high school performances of the year at Drake Stadium.

As part of the building excitement for the 2016 Rio Olympics, the Relays staged numerous Olympic Preview events that brought more than 60 Olympians to the Blue Oval. Those athletes would go on to win 20 medals at the 2016 Rio Games, including 10 gold medals. In addition to showcasing that Olympic talent, the 2016 Relays featured a total of 11 Drake Relays presented by Hy-Vee records that were broken or tied and three world-leading marks were established. The 108th Drake Relays presented by Hy-Vee is scheduled for April 26-29, 2017.