Two of Drake University’s student-produced publications are contenders for the nation’s most competitive award for collegiate journalism. 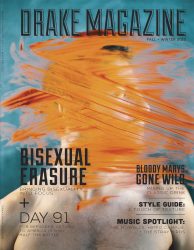 Drake Magazine and Urban Plains are among the 30 finalists for the Associated Collegiate Press’ Pacemaker award in the category of best online publication. The print version of Drake Magazine is one of 22 finalists in the magazine category.

Drake’s publications stand alongside finalists from Yale, Syracuse, Penn State, UNC, UCLA, and other prominent public and private universities. Only one other university, Northwestern, counts two publications as finalists in the online category. The awards will be distributed during the ACP National College Media Convention, scheduled for Oct. 20-23 in Washington, D.C.
“For decades, students in Drake’s School of Journalism and Mass Communication have earned national acclaim for producing top-quality work,” says Kathleen Richardson, dean of the Drake University School of Journalism and Mass Communication. “We are all incredibly proud of our students and faculty for these honors, and for the hard work they put in every day.”

Also this week, several Drake students were named as finalists for the College Media Association’s Pinnacle awards in recognition of their work on Drake Magazine and Urban Plains. CMA will unveil its full slate of finalists in the coming weeks, and issue its awards at the Fall National College Media Convention, Oct. 26-30 in Atlanta.