Rachel Paine Caufield will sign copies of her new book at 9 a.m. Saturday, Jan. 16, at the Drake Diner. Caufield and editorial cartoonist Brian Duffy will hold a book signing from noon to 2 p.m. Saturday, Jan. 30, at Barnes and Noble in West Des Moines. 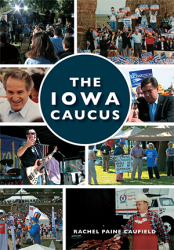 The Iowa Caucus (Arcadia Publishing, 2016) colorfully illustrates with more than 200 photos the vibrant political culture that has emerged as a result of the state’s unique role in presidential politicking.

“Every four years we have this wonderful year of caucus,” Caufield said. “I wanted to show readers what happens here—to really give readers a feeling of the caucus atmosphere.”

Presidential candidates come to Iowa early and often, engaging in a brand of “retail politics” that allows voters remarkable access to aspiring commanders-in-chief. Through a carefully curated—and painstakingly gathered—array of photographs from personal and archival collections, Caufield shows that the campaign trail in Iowa isn’t just about candidates. It’s about average Americans in small-town diners, church basements, and high school gyms.

“In an age of public cynicism about politics, the Iowa caucuses continue to demonstrate the importance of real people talking about issues with would-be presidents,” Caufield said.

Caufield earned her Ph.D. at The George Washington University in Washington, D.C., specializing in American politics and political science methodology, and her B.A. at Hood College in Frederick, Maryland, majoring in political science and mathematics.

Prior to joining the Drake faculty, she was a research fellow at the Brookings Institution in Washington, D.C., studying the relationship between the U.S. Congress and the U.S. Supreme Court. During her tenure at Drake, she spent ten years as a research fellow with the American Judicature Society. She now serves as associate director for citizen engagement at The Harkin Institute for Public Policy and Citizen Engagement, working to bring students and the community together to create a more vigorous and meaningful public dialogue.

Copies of The Iowa Caucus are available via local booksellers, the Arcadia Publishing website, and Amazon. Members of the media may contact Aaron Clark, aclark@arcadiapublishing.com, 843-853-2070 x 217, to request author interviews and copies of the book.