SJMC students once again made an impressive showing, including two first-place awards, in two national contests whose winners were announced over the weekend. 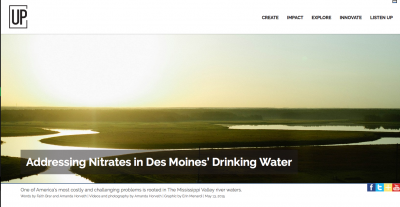 In the Associated Collegiate Press awards:

The awards were announced Friday and Saturday at the National College Media Convention in Austin, Texas.

Campus Climate conversations have been scheduled for the past month to allow faculty, staff and students all over campus to get together to respond to the Campus Climate survey and suggest action steps. Interested in participating in an SJMC-specific Campus Climate forum, either individually or with your student organization? Contact Dean Kathleen Richardson (kathleen.richardson@drake.edu) to set up a time.

The Drake Student Alumni Association is hosting a downtown networking event today, Nov. 2, from 5:30-6:30 p.m. in The Basement of the Des Moines Social Club. Free food and transportation provided. Meet at Olmsted by 5 p.m. to receive a bus ride to the event. Bus will return to Drake by 6:50 p.m.

An informational meeting about next summer’s Lorentzen Student Hatchery will be held Wednesday, Nov. 4, on third floor, Aliber Hall. More at www.drake.edu/cbpa/centers/