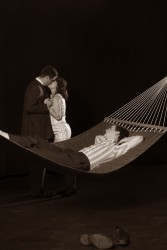 The Drake University Department of Theatre Arts will present The American Plan by Richard Greenberg, beginning Thursday, Feb. 26, in the Studio Theatre of the Harmon Fine Arts Center. Performances will start at 7:30 p.m. on Feb. 26–28 and 2 p.m. on March 1.

Abigail Diamond, senior B.F.A. Directing major and student-director, is excited to be directing her first main-stage play. “I’ve been given so many opportunities as a student-director and a great deal of creative freedom,” says Diamond. “The production team has been incredibly supportive; it’s a great environment in which to learn and direct.”

The cast of The American Plan comprises almost entirely first-year theatre students. Jake Leiberton, first-year B.F.A. Acting and English major, plays the role of Gil Harbison. Leiberton wants people to be prepared for a not-so-fairytale ending. “I want people to walk away from this show understanding that life can be tragic and pitiful but that there is something beautiful about life being imperfect.”

While the production is a dark drama, Diamond says the audience can look forward to comedic moments to lighten the mood. “Some of the characters are very eccentric, which will provide some lighthearted elements.”

The play features Lili Adler, the troubled twenty-year-old daughter of a wealthy German-Jewish refugee. By the shore of a lake, she meets Nick Lockridge, a golden young man who looks to her as if “nothing ever happened to him.” Over the summer, Lili comes to view Nick as her savior, and Nick’s fondness for Lili grows; but to Eva, Lili’s autocratic mother, Nick is an object of suspicion, and the romance that blossoms between him and Lili is an unfortunate condition that must be indulged before it can be obliterated. By play’s end, time, past injuries, and the imperatives of history will conspire to bear out Eva’s dictum that happiness exists, “but it’s for other people.”