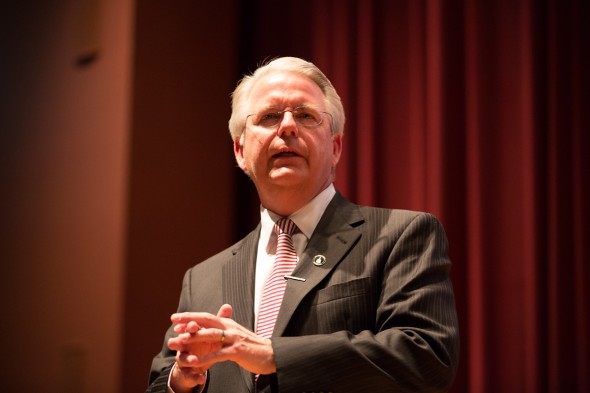 John Forbes, PH’80, owner and manager of Medicap Pharmacy in Urbandale and an Iowa state legislator, was selected to receive the 2014 Lawrence C. and Delores M. Weaver Medal of Honor, the highest honor given by Drake University’s College of Pharmacy and Health Sciences. As part of this honor, he delivered the 2014 Weaver Medal of Honor Lecture, where he discussed the process and procedure of his role in legislative health care reform efforts.

“I was delighted to attend the Weaver Medal of Honor ceremony. The event honored John Forbes, who also happens to be my White Coat sponsor,” says Suzanne Retty, a current pharmacy student. “It was important for me to attend to show my appreciation for his mentorship. He has shown an invested interest in my future, and I’ve been so grateful for his support.”
Forbes was drawn to the pharmacy profession because of his natural desire to help others.
“My whole life I’ve always wanted to help people solve their problems and bring about positive outcomes,” says Forbes. “It’s a passion of mine.”

This is one of the reasons the students who attended the lecture enjoyed listening to the pharmacist and legislator.

“I was so impressed with his commitments outside the profession of pharmacy. His dedication and commitment to his World War II veterans’ service organization has been outstanding,” says pharmacy student Laura Vollmer. “It was amazing to hear how involved he has been—and continues to be—in the community.”

Among Forbes’ many community accomplishments, he is the recipient of the Heroes of the Heartland Award from the American Red Cross. He was recognized for his involvement in coordinating the Central Iowa Honor Fights, which raised over $1.5 million to send nearly 2,000 WWII veterans from Central Iowa on a trip to Washington, D.C., to view the WWII Memorial. He also received the 2010 Iowa Pharmacy Association Bowl of Hygiea Award and was honored on a national level with the 2011 Parata-Drug Times Next Generation Pharmacist Civil Leader of the Year Award.
In Forbes’ lecture, he conveyed a sense of optimism and hope for the profession of pharmacy, as well as expressed his continued dedication to his family, community, and colleagues.
“He showed us life outside and after Drake University, inspiring us to take those challenging steps,” says Vollmer. “He also showed us the opportunities and different paths pharmacy can take you. He’s a true inspiration.”

Leaving the "Summer Slide" at the Playground