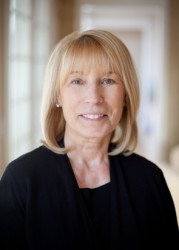 Marsha Ternus, former chief justice of the Iowa Supreme Court, has accepted an appointment as director of the Tom Harkin Institute for Public Policy and Citizen Engagement at Drake University.

Ternus, who graduated with honors from Drake Law School in 1977, was appointed to the Iowa Supreme Court in 1993 by Iowa Governor Terry Branstad and served on the court until December 31, 2010. She will take the reins of the Harkin Institute, a nonpartisan center designed to serve as a hub for public policy research and programming, on August 19.

University officials announced in June that the Institute would support research, collaboration, and education for Drake faculty members, students, and scholars from around the country. It will also provide access to public policy-related programming to the community.

Ternus’ name quickly rose to the top of a list of influential candidates to lead the Institute, due in large part to the integrity, wisdom and balance that she exhibited on the state’s highest court, her passionate enthusiasm for the possibilities of the Harkin Institute and her long-term commitment to Drake.

During her seventeen years on the court, Justice Ternus worked to improve the administration of justice in addition to her adjudicative responsibilities. Under her leadership the court took steps to persuade Iowa lawyers to provide more pro bono services to persons who could not afford an attorney.

Ternus served as the judicial branch representative on the IOWAccess Advisory Council, which was instrumental in encouraging and guiding e–government projects. She also led efforts to implement an electronic document management system in the courts that will result in a paperless court system.

“From the very beginning, as we explored the potential of the Harkin Institute at Drake University, Justice Ternus has had tremendous enthusiasm for and insight into the role that the Harkin Institute can play on campus in serving our students, faculty and staff, the City of Des Moines and the State of Iowa, and the national policy community,” Maxwell said. “She brings vision, experience and an articulate and passionate voice to this leadership role, and we are indeed fortunate that she has agreed to help achieve our aspiration to make the Harkin Institute a major locus of the national public policy discourse.”

Justice Ternus’ efforts on the court complement decades of work by Sen. Harkin, whose 40 years of service in the U.S. Congress worked to advance human rights and access initiatives related to:

Sen. Harkin said that Ternus brings a valuable perspective gleaned as an Iowa native, the first female chief justice of Iowa’s highest court, and a fair and compassionate member of the judiciary.

“Marsha Ternus focused her judicial career on improving oversight for children within the court system, served on the Board of Iowa Legal Aid, and continuously upheld the freedoms and security guaranteed to all citizens under the Iowa Constitution,” Harkin said. “Marsha is an inspiration and a pillar of the community. I commend Drake for naming her to this position and I look forward to the advancements the Institute will make under her leadership.”

“I am delighted to have the opportunity to work with the Drake community to provide meaningful research and educational opportunities for the students and faculty regarding the development and impact of public policy,” Ternus said. “I also look forward to facilitating student and citizen involvement in the examination of public policy issues, encouraging civil debate and promoting discussion of divergent perspectives and opinions.”

University officials announced the creation of the Harkin Institute earlier this summer in connection with Sen. Harkin’s intention to donate his historical papers and materials to Drake. The papers will be housed in the newly created Drake University Archives in Cowles Library and will be made available for research purposes.

The Institute will have a physical home on Drake’s campus; planning for that location is underway.

Transactional and Nonprofits Clinic to open at Drake Law fall 2013