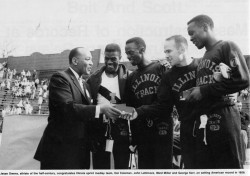 In 1935, a young man named Jesse Owens was a sophomore at The Ohio State University competing in the Drake Relays. Called the “Buckeye bullet” in one Drake publication, Owens tied the Relays record in the 100-meter dash and broke the American record in the broad jump. Just one year later, Owens made a historic trip to the Berlin Olympics and won four gold medals.

Owens returned to Des Moines in 1959 and was celebrated at the Drake Relays as the most outstanding athlete to compete in the first 50 years of the competition.

Olympic talent will abound at the 2013 Drake Relays, where 25 London Games medalists will be competing throughout the week. Visit www.drake.edu/relays to stay caught up on Relays events and news.