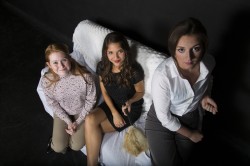 The Clean House takes place in what author Sarah Ruhl describes as “metaphysical Connecticut” and centers on the lives of a married couple and their Brazilian housekeeper, Matilde.

“The way Ruhl is able to blend surrealism with realism in her text takes a simple story and makes you think about the deeper meaning,” Dolezal says.

Originally produced in 2004 by the Yale Repertory Theatre, The Clean House was the runner-up for the Pulitzer Prize in 2005.

“The piece explores the assumptions we make about our parents and how untrue they are,” Lubinus says. “Greenberg’s characters are incredibly human; they have flaws but those flaws aren’t damning. Instead, there is something so positive he sees in people’s flaws.”

This production was the runner-up for the Pulitzer Prize for Drama in 1998. In 2006, a revival was mounted in New York City marking Julia Roberts’ Broadway debut with fellow cast members Paul Rudd and Bradley Cooper.

Both shows contain strong language and adult situations. Non-tobacco cigarettes are used in the production of Three Days of Rain.

Tickets are $5 for adults, $3 for students and seniors, and $1 with valid Drake I.D. Reservations may be made in person or by calling the Drake Fine Arts Center Box Office at 515-271-3841.

What not to do when applying for college