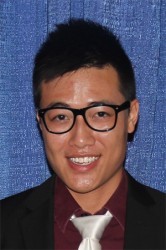 Huy Nguyen, a P4 at Drake University, was recently selected as a finalist for the Future Pharmacist of the Year award in the Next Generation Awards program, sponsored by Parata Systems and Pharmacy Times.

Nguyen is one of only three students selected nationwide for consideration for this prestigious award. The winner will be announced at a dinner at the National Community
Pharmacists Association annual convention at the San Diego Zoo on Oct. 15.

The award is given to a third-year or higher student pharmacist who demonstrates spirit and passion for the profession, primarily through academic achievement and in conjunction with one or more of the following criteria: industry advocacy, patient advocacy, technology innovation, civic leadership, and environmental stewardship with regard to pharmacy.

Renae Chesnut, professor of pharmacy practice and associate dean for academic and student affairs in Drake’s College of Pharmacy and Health Sciences, nominated Nguyen for the award.

“Throughout all of his activities, Huy exemplifies the highest standard of ethical behavior and is a role model to his peers, inspiring them to increased involvement and engagement in the profession,” Chesnut says.

During his time at Drake, Nguyen has been involved with many professional organizations such as Kappa Psi; the Iowa Pharmacy Association (IPA) Student Leadership Conference; and Phi Lambda Sigma, a pharmacy leadership society.

Nguyen has also held various leadership positions on campus, including president of Rho Chi, a national academic honor society in pharmacy, and the 2011 Max W. Eggleston internship with the IPA. He also organized the inaugural “Running of the White Coats” event, a run across campus aimed at raising awareness regarding the importance of taking medicine as directed.

“Huy’s passion for pharmacy, leadership initiative and experience, and service as an advocate for the profession exceed the qualities desired in the Future Pharmacist Award,” Chesnut says.