For some students, the Drake Choir international tour was their last act before stepping into the real world. For others, it’s a memorable college milestone. Either way it was the trip of a lifetime for 64 choral students. Aimee Beckmann-Collier, professor of conducting, led the students to Wales, England, and Ireland to experience the region’s rich history and culture and to perform one last time together before the seniors graduated.

Beckmann-Collier instituted the international tour when she arrived at Drake 23 years ago. Since then, the two most selective choruses, the Drake Choir and Chamber Choir, have been travelling to Europe every four years. 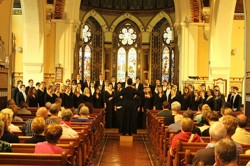 All of the touring students belong to the Drake Choir and 29 of those students make up the Chamber Choir, the most selective choir at the University. The singers come from nearly all of Drake’s schools and colleges, their love of music being the passion that bonds them.

“When I came to Drake as a first-year student, I heard about the tour and thought to myself ‘that’ll be fun,’” says Kayleigh Koester, a senior vocal performance and international relations double major. “What I didn’t realize then is there is an unbelievable undertaking of logistics and preparation that accompanies the fun.”

Preparation for the tour took hundreds of hours of practicing and fundraising. All funds raised for the tour are distributed to students to cover trip expenses. To raise the money, students let their voices do the work. The annual Singing Valentines program and a Drake Choir benefit concert—in which groups and soloists performed everything from show tunes to folk music—helped raise thousands of dollars for their European trip.

“It was a blast for us to do the benefit concert,” says Matthew Haupert, Drake Choir president and senior acting and English double major. “It gave the audience something very different from a typical Drake Choir concert.”

Through fundraising efforts, the choir raised $250,000 for the 2012 tour. Since 1992, the choral program has raised $3 million for the international tour.

Beyond singing their hearts out for funds, Beckmann-Collier and the choruses worked diligently to build consistency and a strong community.

“Touring requires lots of patience, humor, and flexibility and everyone has to figure out how to work together and be a community,” Beckmann-Collier says.

On May 17 the choruses boarded an eight-hour flight from Minneapolis to London and began their adventure. The trip’s purpose is to give students the opportunity to experience touring and foreign cultures and learn about the history of choral music. Students performed in venues rich with history, like St. Patrick’s Cathedral and Trinity College in Dublin.

The trip was not all work for the students. During their free time, students explored landmarks, including Stonehenge and the Cliffs of Moher.

It also was not unusual for the students to do a little informal singing for community members or whenever it felt right to sing. The Brocal Chords, a small all-male, student-led, acapella group, took to the streets of Dublin in their spare time to perform.

Students learned what Welsh and Irish cultures were like on and off the stage. In Wales and Ireland the choral students collaborated with three local choruses. After the performances the locals invited the students to eat, sing, and mingle—a post-concert tradition.

“One of the coolest aspects of doing a choir tour abroad was using music to connect with people from across the world, and this concert highlighted just that,” Haupert says of the concert in Flint, Wales, with the Builth Men’s Voice Choir.

Three of the concerts helped raise money for local communities. Proceeds from the concerts went toward a youth project and air ambulance in Wales and a homeless project in Ireland.

“They produced seven tremendously good concerts, which is very difficult to do,” says Beckmann-Collier. “And they used their talents to give gifts to other people.”

“We tour with the mindset that music comes first—over everything,” Koester says. “The exhaustion of travel and sightseeing sets in, but none of it matters because we drop it at the door to serve the music.”

To read personal accounts and see pictures from the international tour visit the Drake Choir’s blog.