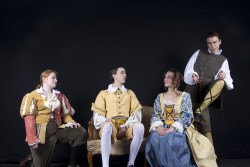 Set in 1634 on an island off the coast of London, Twelfth Night is a comedy centered around love triangles and mistaken identities. Viola masquerades as a page in the service of Duke Orsino and is sent to solicit the affection of Olivia on his behalf. Olivia disregards the Duke and becomes smitten with Viola, unbeknown to the fact that Viola is a woman. Meanwhile, Viola falls in love with the Duke. Hilarity ensues as the characters attempt to untangle the twisted love triangle.

“Twelfth Night is Shakespeare’s romantic comedy,” says Kash. “It is like seeing a Jennifer Aniston or Hugh Grant film; contemporary audiences will connect to the romantic comedy aspects of the play.”

Kash has performed in Twelfth Night in the past, but this will be her first time directing the play. Drake Theatre typically stages a Shakespearian play every four years in order to expose students and community members to classical theatre.

“Macbeth was the last Shakespearian play that we did, so we felt that it was time for a comedy and this play seemed well fit for the actor pool,” says Kash.

Performances start at 8 p.m. March 1-3, and at 2 p.m. March 4, in the Performing Arts Hall of the Harmon Fine Arts Center, 25th Street and Carpenter Avenue.

Admission is $6 for adults and $4 for seniors and students with a Drake ID. Tickets can be reserved by calling the Drake Fine Arts Box Office at (515) 271-3841.