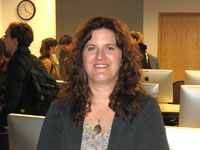 Producer-Director Laurel Burgmaier told the JMC100 Field Photography class and guests Wednesday she’s especially sensitive to the rural people she features in her documentaries. She resides on a farm with her husband and 2-year-old daughter, Halle.

Burgmaier said her IPTV experience began with an internship that led to a job as a production assistant.

Her best known production, More Than a Game: 6-on-6 Basketball in Iowa, has aired numerous times on IPTV since February 2008. Iowa’s last 6-on-6 girls’ tournament was staged at Vet’s Auditorium, Des Moines, in 1993. The program won a regional Emmy nomination.

Other Burgmaier projects include Timeless Tractors and The People in the Pictures – the Wettach Farm Photos.