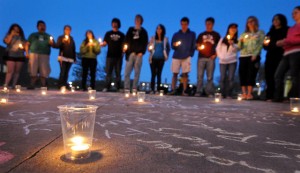 Sarah Andrews, a junior studying magazine journalism and graphic design, was named a national finalist in the Society of Professional Journalists Mark of Excellence contest.

She was recognized for her photographs of a candlelight vigil for a student who had died. To be recognized as one of the top three in the feature photography category is an impressive honor.

You can see more of Sarah’s work on Flickr.