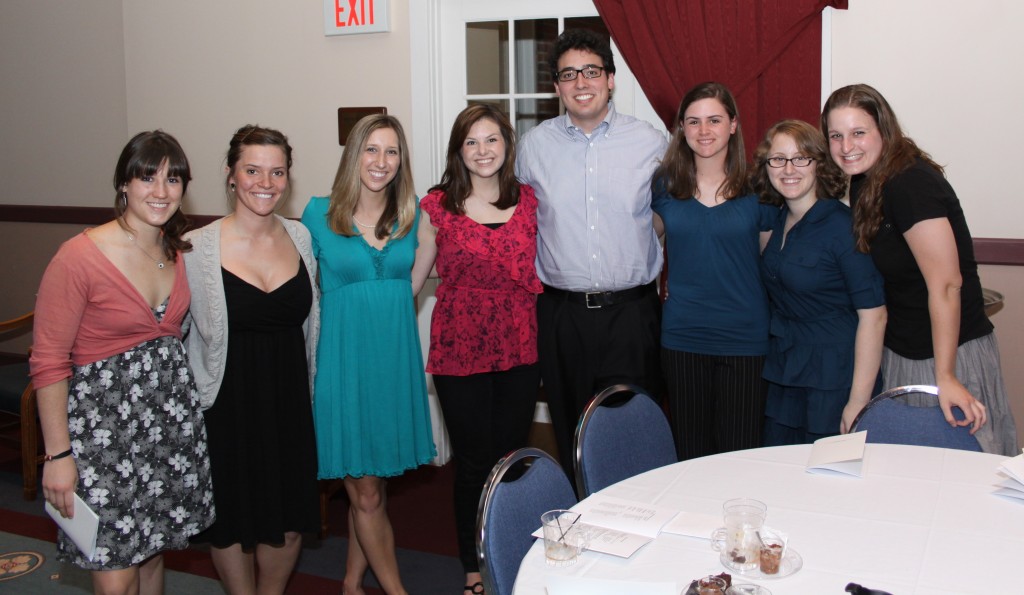 The School of Journalism and Mass Communication celebrated the graduating class of 2011 and winners of departmental scholarships during an awards ceremony on Sunday evening, April 3. See photos on Facebook.

Approximately 100 students, parents and faculty members attended the dessert reception, held in Levitt Hall of Old Main. This year for the first time, the graduating class was asked to nominate a senior to address them. Matt Vasilogambros, a news-Internet and politics major, was chosen for the honor.

Emily Cook, a magazine major, was recognized as the School’s top scholar, the senior with the highest grade point average. Her name will be engraved on a silver bowl and displayed in Meredith Hall.

Cook and  seven other students were inducted into the Kappa Tau Alpha national honor society, which recognizes juniors and seniors majoring in journalism or mass communication, based on scholarship and character. The 2011 inductees were:

Other awards and scholarships announced at the reception included:

Hosman Awards for work on the Drake Digital News or other electronic publications sponsored by the SJMC:

Ted Sell Memorial Award for a junior or senior interested in a career in print or television:

Karyl Van Scholarship 2011-12 for student to work in the E.T. Meredith Center for Magazine Studies:

Frank Miller Scholarship for contributions in the area of Web-based graphic design:

Robert D. Woodward Endowed Scholarship for a news-Internet major who has demonstrated a passion for accuracy, ethical decision-making, and reporting and editing the facts:

Fausch Awards for outstanding contributions to research for the senior capstone: