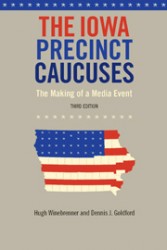 As speculation about presidential candidates grows ever-louder in Iowa and political figures including Newt Gingrich, Sarah Palin and Mike Huckabee breeze through for book signings and radio interviews, two of the state’s foremost political experts have published a revised and expanded version of the definitive book on Iowa’s caucuses.

With “The Iowa Precinct Caucuses: The Making of a Media Event, Third Edition,” (University of Iowa Press, 378 pp., $34.95) author Hugh Winebrenner and first-time co-author Dennis J. Goldford explain the political phenomenon that may well propel the careers of some political hopefuls and crush the dreams of others in 2012.

This third edition, to be released Wednesday, Dec. 1, adds all-new chapters on the 2000, 2004 and 2008 election seasons to the tried-and-true tome. Past editions of the tried-and-true resource have been cited in national news outlets including MSNBC, CNN, ABC News and The New York Times.

“Whether you’re a first-time visitor or making your regular trek to the unique world of Iowa presidential politics, this is a must-read guide for the political traveler,” said Steven Thomma, White House correspondent for McClatchy Newspapers. “Full of details on the voters, candidates and media, Winebrenner and Goldford show how and why Iowa does what it does.”

In presidential election years, precinct caucuses allow voters to pare down crowded fields of White House hopefuls and stump for political party platform issues. Iowa’s first-in-the-nation caucuses receive unparalleled attention because of their primacy and reputation for accurately reflecting the outlook for candidates.

“Since the first edition of this book was published in 1987, and as much so since the second edition was published in ’97, Iowa has secured its first-in-the-nation caucus status and become recognized as a winnowing agent for prospective presidential candidates,” said Winebrenner, former dean of the College of Business and Public Administration at Drake University and professor of politics at Drake from 1979 to 2000.

The past three presidential election cycles, chronicled in this new book, have been captivating and influential. The 2000 election saw the first winner of the Iowa caucuses to reach the White House since 1976; the 2004 election tracked the roller-coaster fortunes of Howard Dean and John Kerry; and 2008 marked the unlikely emergence of Barack Obama as a presidential contender.

Powerful — For better, or for worse

Through anecdotes, research and analysis, “The Iowa Precinct Caucuses” demonstrates that Iowa is an increasingly powerful indicator of the campaign prospects of presidential hopefuls.

Goldford has a few favorite stories to illustrate the media frenzy surrounding the caucus, including this anecdote from the 2004 campaign season:

“In the days leading up to the caucuses, the print press had written just about every story that could be told on the subject,” he said. “So, in The New York Times that Monday morning, below the fold, there was a story about the expensive steakhouse restaurant at Des Moines’ 801 Grand, with a diagram of the layout of the tables to show what media and political stars sat where.”

The Times’ story was one of many that made an icon of “Des Moines’s meatery of choice,” lending additional celebrity to Iowa and contributing to the state’s influence beyond its local voter base. In the article, Winebrenner spoke on the livelihood and longevity of the state’s caucus, musing, “There have been attempts by the parties, the candidates, by other states to derail it or at least put it in some kind of perspective, and none of that has succeeded.”

Winebrenner retired from teaching in 2000 and moved to sunny Arizona, where he continues to follow state and national politics. Having moved out of state, he found an ideal co-author and torch runner in Goldford.

Goldford and Winebrenner worked on Drake’s faculty together for 15 years. They had a sort of “friendly rivalry” for several years, serving as political analysts for competing news stations in Des Moines, but off the air the two were — and are — close colleagues.

“Dennis has become the national spokesperson for information on the caucuses,” Winebrenner said. “It was just rather logical that, after I left the state, we’d get together to continue this work.”

By his own count, Winebrenner participated in more than 1,500 interviews. He’s studied the Iowa caucuses since 1979. Goldford tallied 550 interviews during the 2007-08 election year alone, having spoken to news outlets in Japan, Australia, Great Britain, the Middle East and elsewhere. Goldford also is the author of The American Constitution and the Debate Over Originalism, published by Cambridge University Press in April 2005, and is currently writing a new book on law, politics and religion.

Synopsis of the new edition


Below is an excerpt from the synopsis of “The Iowa Precinct Caucuses: The Making of a Media Event, Third Edition.”

“When Iowa Democrats pushed forward their precinct caucuses in 1972, the Iowa caucuses became the first presidential nominating event in the nation. Politicos soon realized the impact of Iowa’s new status and, along with the national media, promoted the caucuses with a vengeance.

“The Iowa Precinct Caucuses chronicles how the caucuses began, how they changed, and starting in 1972 how they became fodder for and manipulated by the mass media.  Hugh Winebrenner and Dennis J. Goldford argue that the media have given a value to the Iowa caucuses completely out of proportion to the reality of their purpose and procedural methods.

“In fact, the nationally reported “results” are contrived by the Iowa parties to portray a distorted picture of the process. As presidential primaries have grown in the media spotlight and superseded the parties’ conventions, Iowa has become a political proving ground for the confident, the hopeful, and the relatively unknown, but at what cost to the country?”

More information on the book is available from the University of Iowa Press website. Journalists may request review copies from Allison T. Means, associate marketing manager, by e-mail at allison-means@uiowa.edu.

Coping with Holiday Stress and Recover the Happiness of the Holidays