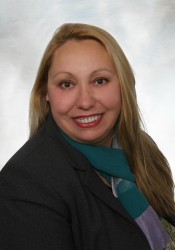 School of Education Counseling Masterâ€™s candidate Zifa Hackett became the recipient of of the 2010 Sonja Stefanadis Graduate Student Scholarship in amount of $ 1000.00 by the Daughters of Penelope Foundation.  The scholarship is awarded to women in higher education that achieve exemplary academic goals. The objectives of the Daughters of Penelope are to promote Hellenism, Education, Philanthropy, Civic Responsibility, and Family & Individual Excellence. They are non-partisan and non-denominational.

At thirty-five years old, Hackett and her two children landed at the Des Moines Airport on July 24, 2000 after a long flight from Moscow. She learned to read in English when she was 34 years old and could only speak a handful of English words when she arrived.  â€œThe fact that we made it to the land of freedom was overwhelming.  Tears of joy ran down my face.â€,  she explained.  Hackettâ€™s main goal was to learn English and entered ESL classes to help her accomplish that goal.  One year later she was able to pass the Compass test and enrolled in an Information Technology training program at DMACC.  â€œThe longer I studied computers the more clearly I understood that I missed helping children, I and obtained my teaching license.â€,  Zifa added.  Ms. Hackett substituted in Des Moines Public schools and felt at ease in that setting. In June 2004 she gave birth to a daughter (Gloria ) and she decided to stay home and take care of her while she was small.  In the last five years she continued learning English and did volunteer teaching.

Ms. Hackett stated of the scholarship, â€œIt is to further improve my education and skills in order to better serve as an effective teacher and counselor of children that I energetically and enthusiastically study in the Master of Science degree program in Counseling at Drake University. I am honored with an acceptance to the program. I shall display my commitment to meeting Drake standards of excellence and representing Drake well.â€