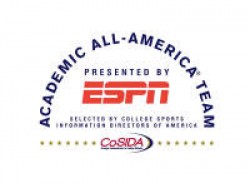 To be nominated, a student-athlete must be a starter or important reserve with at least a 3.30 cumulative grade-point-average (on a 4.0 scale) at his/her current institution. Nominated athletes must have participated in at least 50 percent of the team’s games at the position listed on the nomination form (where applicable).

A business major, Foster maintains a 3.52 GPA. He has started all 16 games for Drake, registering a goal and an assist from his defender’s position.

Majoring in health sciences, Kennedy owns a 3.61 GPA. Appearing in all 16 contests for the Bulldogs, including eight starts, Kennedy has collected a goal, while sharing the team lead in assists (3).

The Bulldogs return to action with a road game at 2 p.m. Saturday, Nov. 6, battling Eastern Illinois.

After earning All-Freshman laurels a year ago, Moklestad was chosen as a first-team recipient, registering team-leading marks in goals (5), points (11), shots (29), shots on goal (21) and second in game winners (2).

Moklestad ranks fifth in the MVC in game-winning goals, sixth in shots and 10th in goals and points per affair, while finishing third, fourth, fourth and eighth, respectively in league-only games in goals, game-winning goals, points and shots per match.

Dusek turned in a breakout rookie campaign recording team highs in goals (5), points (11) and game-winning goals (4), while rating second in shots (35) and shots on goal (14).

Fisher crafted a stellar rookie campaign from her defender’s slot proving to be a dual threat for the Bulldogs helping anchor a defensive unit that posted a school-record nine shutouts, while offensively providing four goals and two assists.

Litch was thrown into the fire immediately for Drake and she responded by establishing school records for shutouts with nine, while pulling in 91 saves and owning a single-season Bulldog record 0.75 goals against average.

Earning honorable mention honors for the second consecutive season was Dorrington, who helped anchor a Drake defensive unit that posted a school-record nine shutouts, while offensively providing a goal on three shots.

Having battles injuries in each of the last two campaigns, Walsh fashioned a strong season at both ends of the pitch sparking the Bulldogs to their first 10-win season since 2006.

The six-foot 11-inch, 244-pound VanDeest was named to the Missouri
Valley Conference All-Freshman Team last year. He started all 33 games
at center, averaging 8.5 points and 4.2 rebounds while shooting 48.8
percent.

Drake was picked to finish eighth in the preseason poll conducted by
the league’s coaches, media and sports information directors.

Wichita State, with four returning starters, was the overwhelming choice to finish first in the preseason poll.

The Bulldogs will play their first exhibition game Saturday, Nov. 6,
when they take on Wisconsin-Parkside at 7:05 p.m. at the Drake Knapp
Center. The team plays Texas Southern at home on Nov. 13, then travels
to Iowa State on Nov. 17.

Josh Young, who became the career scoring leader in Drake basketball
history this past season, was selected by the Austin Toros in the third
round of the 2010 NBA D-League draft Monday night.

Young will report for training camp next Monday. The Austin Toros are affiliated with the San Antonio Spurs of the NBA.

Young graduated from Drake as the school’s career leader in scoring
(1,789 points), three-point baskets (255) and free throws made (442). He
was one of 10 national finalists for the Lowe’s Senior Class Award in
college basketball.

A three-time All-Missouri Valley Conference performer, Young was
named to the National Association of Basketball Coaches All-District 16
first team this past season.

Head coach Amy Stephens made it clear before the season that her
freshmen would play, even start, with regularity this season. Drake’s,
80-52, exhibition victory over Upper Iowa Monday, Nov. 1, at the Knapp
Center demonstrated why.

Grenfell connected on 5-of-6 shots, including 3-of-4 from
three-point range, and tied teammate Kristin Turk (Des Moines, Iowa) for
the game lead with 19 points. Christianson added 10 points on 5-of-13
shooting and totaled four assists and three rebounds. Reid tallied nine
points, all in the first half, on 4-of-5 shooting.

As a team, the Bulldogs were 22-of-26 from the free throw line,
compared to Upper Iowa’s 11-of-13 night. Turk led Drake with an 8-for-8
effort from the line while adding three assists, five steals and four
rebounds.

The senior made four free throws and a jumper to push Drake on an
8-0 run with eight minutes remaining in the contest to ensure the
victory.

The Bulldogs wrap up their exhibition schedule Saturday, Nov. 6,
against Quincy (Mo.). Tipoff is scheduled for 2:05 p.m. in the Drake
Knapp Center.

The Pipes, the Pipes Were Calling A School of Education Graduate

Drake University students to participate in "Battle of the Brains"