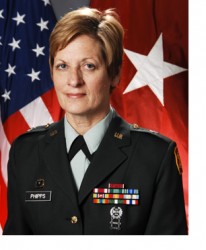 The event, which is open to the public, is part of Drake’s fall Let’s DU Lunch series and will be held at All Play, 615 Third St. in downtown Des Moines. Networking begins at 11:30 a.m., followed by the lecture and luncheon at noon.

Military veterans and service men and women will receive free lunch and be recognized for their service.

Phipps, who has commanded at the unit and battalion levels, began her military service in 1985 in the United States Army Reserve, where she served as an officer for the Specialty Corps. She is a member of the Iowa National Guard and a former member of the Michigan National guard.

Phipps also serves as an attorney for the McKee, Voorhees & Sease firm in Des Moines.

The Let’s DU Lunch series is sponsored by Drake and the Greater Des Moines Partnership. Tickets cost $17 per lunch, and reservations are recommended due to limited seating.

For more information or to register for Let’s DU Lunch, contact the Office of Alumni and Parent Relations at 515-271-2500.

Gifted and Talented Conference for Credit