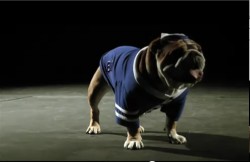 The costume, created by Instructor of Theatre Arts Josie Poppen, marks Porterhouse’s entry into his official mascot duties, where he will entertain and befriend Bulldog fans at Drake events throughout the year.

More than 500 people have watched a YouTube video where Porterhouse made his modeling debut. The video is available at this link.

Porterhouse’s official mascot duties began late this summer, but basketball season is when he’ll truly shine. The first women’s basketball game is Nov. 1, and the first men’s game is Nov. 6.

His owners — Kevin Bell, a Drake law student and president of the Student Bar Association, and Erin Bell, a Des Moines nurse — have taken it upon themselves to bring him to all sorts of events, from sports games to National Alumni receptions to Drake Day at the Iowa State Fair.

This mascot rarely misses a party, and with his new costume he can make a more stylish appearance.