“Reading Lolita in Tehran” describes the Islamic revolution in Iran and how it affected one university professor and her students. The book, which has been translated into 32 languages, has won numerous awards and been named one of the “100 Best Books of the Decade” by The Times of London.

Nafisi taught at the University of Tehran, which expelled her for refusing to wear the mandatory Islamic veil. She has lived in the United States since 1997 and is now a visiting professor and director of cultural conversations at the Foreign Policy Institute of Johns Hopkins University’s School of Advanced International Studies in Washington, D.C.


In her Drake lecture, Nafisi is expected to explore the power of literature and imagination to transcend political borders and to liberate minds and peoples.

Nafisi wrote about this subject in a 2004 article in the Washington Post in which she recounted the story of a former student who told her after being released from jail that she and one of her cellmates kept their spirits up by exchanging stories about their class discussions, about the books they read, about Henry James and Scott Fitzgerald.

“At the end of her story,” Nafisi wrote, “my student informed me that she had been luckier than her friend, who had been executed. . . . Since then I have been haunted by the idea of the places to which these beloved books have traveled — from the warmth of their libraries, from the vivid conversations of classrooms, to the dark cells of executioners.

“We know,” Nafisi added, “that fiction does not save us from torture or the brutality of tyrannical regimes, or from the banalities and cruelties of life itself. . . . But we do know that, when confronted by utter degradation, by confiscation of all that gives life its individual worth and integrity, many go instinctively to the highest achievements of mankind, to works that appeal to our sense of beauty, memory, harmony — those that celebrate what is humane, those that we consider original works of the imagination.”

In her books and her lectures, Nafisi uses her life experiences to demonstrate the value derived from literature and how she has used that knowledge in her own life. 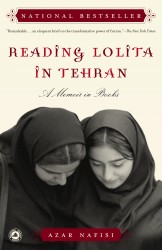 Nafisi focuses on the human rights of Iranian women and girls

She has lectured and written extensively in English and Persian on
the political implications of literature and culture. She also focuses
on the issue of human rights of Iranian women and girls and the
important role women play in the push for pluralism and an open society
in Iran.

Nafisi’s most recent book is “Things I Have Been Silent About:
Memories,” a memoir about her difficult childhood and dysfunctional
family. Her mother was a member of the Iranian Parliament at the same
time that her father, once mayor of Tehran, was in jail on trumped-up
charges of financial irregularities.

Nafisi also has published a children’s book with illustrator Sophie
Benini Pietromarchi titled “BiBi and the Green Voice.” She is working
on a new book, titled “Republic of the Imagination.”

Author Azar Nafisi: 'Ignorance has become a sort of badge of honor' in the United States