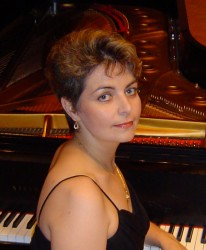 Drake University will host a guest recital performed by Ksenia Nosikova, professor of piano at the University of Iowa, on Thursday, Oct. 21.

The concert, which is free and open to the public, will be held at 8 p.m. on the Jordan Stage in Sheslow Auditorium in Old Main, 2507 University Ave.

Nosikova has recorded several albums, including “Years of Pilgrimage,” a collection of compositions by Franz Liszt, and “Flight and Fire,” a 2007 collaboration with American composer Lera Auerbach. Her latest CD, “Music for Piano and Chamber Orchestra,” was released in 2009.

Nosikova earned her bachelor’s and master’s degrees from the Moscow Conservatory and her doctorate from the University of Colorado.