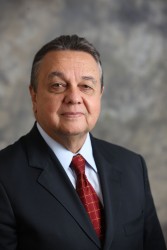 Drake University will host a lecture led by former Minister of Agriculture of Brazil Roberto Rodrigues on Wednesday, Oct. 13, in conjunction with the 2010 World Food Prize Laureate Lecture Series.

The event, which is free and open to the public, will be held in room 205 of Cartwright Hall, 2621 Carpenter Ave.

Rodrigues is chair of rural economics at SÃ£o Paulo State University in Jaboticabal. He also serves as co-chairman of the Interamerican Ethanol Commission, coordinator of the Getulio Vargas Foundation Agrobusiness Center and president of the Superior Agriculture Council of SÃ£o Paulo’s Federation of Industries.

The lecture is co-sponsored by the Drake Center for Global Citizenship, Drake Law School and Drake Agricultural Law Center.

Raising awareness through debate and discussion

The World Food Prize Laureate Lecture Series aims to spark debate and discussion about global food security issues and to challenge students to think more broadly about these topics.

The series is a component of the World Food Prize Norman E. Borlaug International Symposium, which takes place in Des Moines, and assembles experts from over 65 countries to discuss agriculture and global development issues.

“We are thrilled to continue our partnerships with Iowa colleges and universities during this incredible week of events,” said Kenneth M. Quinn, president of the World Food Prize Foundation.

“One of the main goals of our founder, Dr. Norman Borlaug, was to educate citizens and increase public awareness about the ongoing challenge of providing enough food for everyone around the globe. We hope to inspire the next generation of scientists and leaders in Iowa and elsewhere to help solve these critical issues.”

A world of difference: improving lives on a global scale

During the three-day symposium, the annual World Food Prize will be awarded to an individual who has contributed to the study of world food supply — food and agriculture science and technology, manufacturing, marketing, nutrition, economics, poverty alleviation, political leadership and the social sciences. The prize includes a $250,000 cash award.

Dr. Norman E. Borlaug, recipient of the 1970 Nobel Peace Prize, created the World Food Prize. Since 1986, the award has honored outstanding individuals who have made vital contributions to improving the quality, quantity or availability of food throughout the world.

In 1990, businessman and philanthropist John Ruan assumed sponsorship of the prize and established The World Food Prize Foundation, located in Des Moines, Iowa. Since its inception, The World Food Prize has been awarded to individuals from Bangladesh, Brazil, China, Cuba, Denmark, Ethiopia, India, Mexico, Sierra Leone, Switzerland, the United Kingdom and the United States. Learn more at www.worldfoodprize.org.