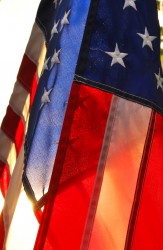 Drake University will host a 9/11 Flag Memorial Ceremony featuring the placement of 2,997 American flags on Drake’s campus at 9 a.m. on Friday, Sept. 10. The flags will represent all of the people who lost their lives in the 9/11 terrorist attacks.

The event, which was organized by the Drake College Republicans student group, will be held on in the Helmick Commons, east of Olmsted Center, 2875 University Ave. The rain location will be Parent’s Hall in Olmsted.

“We wanted to make sure the sacrifices and consequences felt during and after the 9/11 terrorist attacks are not forgotten,” said Josh Strief, president of the Drake College Republicans. “We felt it was important to provide a community event at Drake which would allow students, faculty and community members to come together in a moment of prayer and remembrance.”

Matt Strawn, the chairman of the Iowa Republican Party, will speak at the event and a prayer will be led by Pastor Terry Amann of Walnut Creek Community Church in Des Moines.

“Although the event is sponsored by the College Republicans and some prominent Iowa Republican leaders are expected to attend, we want the event to be nonpartisan and inclusive of all people,” Strief said.

Drake students to participate in walk to fight diabetes