Alumnus to present lecture in Life After Drake series 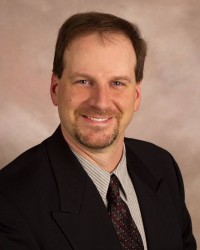 Brian J. Albright, a 1992 Drake University graduate, will return to campus to discuss how the science behind video game technology may be used in creating carbon-neutral energy, better tumor treatment and enhanced national security.

The lecture, which is free and open to the public, will be held on Wednesday, Sept. 8, at 5 p.m. in Sheslow Auditorium in Old Main, 2507 University Ave. A reception will follow in Levitt Hall.

Albright is a scientist in the Computational Physics Division at Los Alamos National Laboratory. He will discuss how Los Alamos has been using the world’s fastest supercomputer, new numerical simulations and high power lasers to expand the frontiers of science.

The lecture, which is part of the Life After Drake Series, is titled “Bigger, Hotter and Faster: Extreme Physics at the X-Games of Science.”

In November 2008, scientists at Los Alamos National Laboratory switched on Roadrunner, then the world’s fastest computer and the first to achieve a million-billion operations per second. IBM and the Department of Energy built the machine to model nuclear explosions, but it is also used for science, including modeling the nonlinear physics of high-power lasers.

Albright’s team at Los Alamos is developing new numerical simulations to take advantage of a major leap in computing power from an unexpected source: videogame technology. The project aims to find a better understanding of plasma and high energy density media.

Albright, who has received two U. S. Department of Energy and National Nuclear Security Agency Defense Programs Awards of Excellence, joined Los Alamos in 1999 as a postdoctoral researcher and in 2001 he became a staff member.

His research has spanned a range of problems related to waves and particle and energy transport in plasma and high energy density media. He also has focused on high performance scientific supercomputing.

Albright leads the development of the VPIC simulation code, the world’s fastest particle-in-cell plasma simulation code. His team was named a finalist in the international ACM/IEEE Gordon Bell Prize, which recognizes outstanding accomplishment in the field of supercomputing.

The author of many articles, Albright’s accomplishments in supercomputing were mentioned in the U.S. Congressional Record (Senate S7974, Senate Resolution 637).

An Iowa native, Albright earned a bachelor’s degree in mathematics and physics from Drake and a master’s degree in 1993 and a Ph.D. in physics in 1998, both from the University of California Los Angeles.