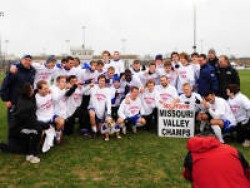 Coming off a record-setting campaign in which the Drake men’s soccer team advanced to the Quarterfinals of the NCAA Tournament, the Bulldogs will square off versus the Des Moines Menace of the Premier Developmental League on Saturday, May 8, at Valley Stadium in West Des Moines for a 7:30 p.m. exhibition.

Drake came within one win of reaching the 2009 College Cup, the Final Four of the NCAA Tournament last fall as the Bulldogs posted a school-record 16-7-2 mark, including Drake’s first-ever Missouri Valley Conference Tournament title en route to collecting the highest ranking in school history (No. 8) by the National Soccer Coaches Association of America.

The Menace and Drake have a history of working together. In 2009, several Bulldogs helped the Menace (11-1-4) to the Heartland Division’s regular- and post-season championships. Among the Drake players in the Menace’s line-up last season were first team All-MVC performers Julien Edwards (Ottawa, Ontario) and Garrett Webb (Prairie Village, Kan.), along with Iowa natives Nick Foster (West Des Moines, Iowa) and Hunter Kennedy (Cedar Rapids, Iowa).

Tickets are available at the gate for Drake students, faculty and staff for $5 when they show their Drake ID. Regular price is $9 for adults (13-older), $7 for ages 4-12, and free for children three years and under.

Drake returns five starters from last year’s squad and will open its 2010 campaign with a date at 2009 NCAA Tournament participant Michigan on Sept. 3 in Ann Arbor, Mich.