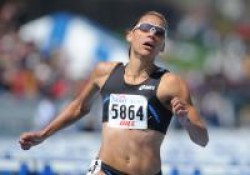 Jones is part of a star field that Drake Relays Director Brian Brown has put together for this event with the existing meet record of 12.74 seconds, set by Jones in 2008, standing in jeopardy.

Jones made history on March 13, becoming the first woman ever to claim back-to-back titles in the 60 hurdles at the World Indoor Championships in Doha, Qatar while setting an American record in the process.

Jones posted a 2008 world leading mark of 12.43 seconds, which also was her personal best, during the semifinal round of the 2008 Olympics. She ran a top 2009 outdoor time of 12.47 in Rethimno, Greece, to defend her Grand Prix title.

The 29-year-old Felicien, from Pickering, Ontario, Canada, is owner of five Drake Relays individual career titles. She was named the outstanding women’s performer of the 2002 and 2003 Drake Relays.

Jones will compete with the following athletes in the invitational field:

•        Perdita Felicien, 2010 Drake Relays Athletes Hall of Fame inductee who was ranked No. 6 in the world last year

As a junior at Houston, Adigun has a personal best of 12.88 en route to winning the 100 hurdles at the 2009 NCAA Midwest Regional Championship in Norman, Okla.