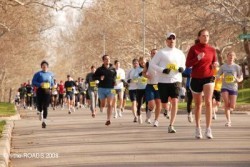 Entries are being accepted for the 42nd annual Drake Relays On-The-Road 8-kilometer and half-marathon races, which start at 8 a.m. on Saturday, April 24.

They are Iowa’s oldest road races. Both races will start adjacent to Drake Stadium on Forest Avenue east of 28th Street and will finish near 25th and Carpenter Avenue, adjacent to the Drake Fine Arts Building in Des Moines.

The first 200 runners who pick up the race packet will get special Drake Relays ASICS socks.

Overall winners of the 8-K and half-marathon, both male and female, will receive the 101st edition of the Drake Relays Champions watch and a $100 Asics gift certificate. Top open finishers of both races will receive cash prizes of $400 for first place, $200 for second place and $100 for third place.

A $100 award bonus will be given to an Iowan who wins either the 8-kilometer or half-marathon race.

Age division awards of $100 will be given to the first runner beating the 8-kilometer or the half-marathon records.

For more information on the races, e-mail calmurdock@earthlink.net or call 515-274-5379. Entry forms are also available at www.DrakeRelays.org.