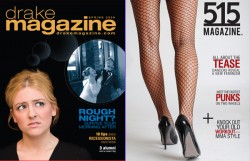 The society accepted entries in 39 categories from across 12 regions for work in the 2009 calendar year.

“To have six finalists is a testament to the quality of the work our students are doing,” said Lori Blachford, the Peggy Fisher and Larry Stelter Chair in Magazine Journalism and faculty adviser for Drake Magazine. “I’m especially proud that Drake students are excelling in both print and online formats. That kind of versatility is essential in the ever-changing media environment.”

The Drake finalists, nominated in the Four-Year College/University division, are:

SPJ will announce first, second and third place awards at the regional conference in Omaha, Neb., on April 10. First place winners will advance to the 2010 SPJ Convention & National Journalism Conference this fall.