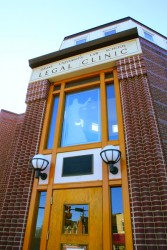 The Iowa Supreme Court will travel to the Drake University Law School for oral arguments Tuesday, March 2, starting at 9:30 a.m. Drake law students will have the opportunity to see how attorneys represent their clients before the court in the courtroom of Drake’s Neal and Bea Smith Law Center.

Following the arguments, the justices will participate in a question-and-answer session for the students. This special event is designed to help law students become more familiar with appellate court procedure and arguments.

The hearing at Drake is part of the Law School’s 73rd Annual Supreme Court Celebration, which also will include a breakfast before the hearing for students and justices of the Iowa Supreme Court. The justices will have lunch with Drake Law School faculty that day.