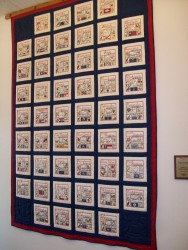 Myrtle Staley, 95, a resident of Valley View Village in Des Moines, Iowa, formerly of Donnellson, went home to be with her Heavenly Father on September 1, 2009.

She was the daughter of Ernest J. Hohl and Orlean Fern Onstott.

Myrtle graduated from the Donnellson High School in 1932.

Myrtle attended Drake University. She received her BSE in Education in 1943. After graduation she moved to Riverside, California and worked for the Southern California Telephone Company.

After completing her master’s degree, she spent a year teaching children of the U.S. Army personnel in the Butzbach American School, Butzbach, Germany. Headquarters Combat Command “A” Third Armored Division.

Myrtle was so grateful for the education she received at Drake and hoped that the Myrtle Hohl Staley Scholarship will enable many future teachers-and their students-to reap the benefits of the Drake experience. Myrtle has provided remarkable educational opportunities for future students.

Myrtle was a member of Alpha Delta Kappa, the Drake Heritage Society and S.S Still Society.

Myrtle attended and was a member of the Central Presbyterian Church of Des Moines since 1955.

She kept busy with her hobbies of cooking and quilting.

Myrtle is survived by Sister in Law’s, Doris Hohl of Malcom, Ia. and Helen Hohl of Donnellson, Ia., Nephew Wayne (Carlene) Hohl of Altoona, Ia. and numerous other nieces and nephews. She was preceded in death by her brother Melvin Hohl, sister Lilly Hohl and stepbrother Raymond Hohl.

No services are planned as Myrtle was doubly generous to students by donating her body to the College Of Osteopathic Medicine and Health Sciences, Body Donation Program and by establishing a future endowed scholarship fund. Her wish was to do something for students who need help and are striving toward something to help humanity.

Those wishing to express their sympathies through a memorial may direct their gift to Mercy Hospice of Des Moines in her memory.