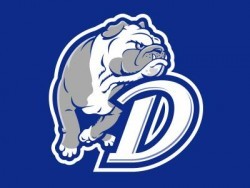 Reservations are now being accepted for the annual Drake Athletic Department Bulldog Corn Feed, which will be held at 5:30 p.m. Monday, Aug. 24, at the Drake Knapp Center, 2601 Forest Ave.

The event will begin with the Bulldog Club Annual Meeting followed by a dinner at 6:30 p.m. and the program at 7:15 p.m.
Drake football coach Chris Creighton, basketball coaches Amy Stephens and Mark Phelps and soccer coaches Sean Holmes and Lindsey Horner will preview their respective seasons during the program.
The event, which has been held since 1964, is open to the public.Cost is $25 per person and can be paid either in advance or at the door. Fans are encouraged to make their reservations by e-mail at jolene.ostbloom@drake.edu or by calling 515-271-3647 no later than Aug. 14.
Parking will be available in the Tennis Center lot at 27th and Court streets. Dress is summer casual.
Prev Post