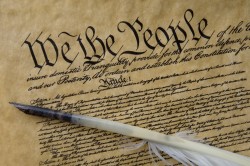 Drake Law School’s Constitutional Law Center will hold its
2008 symposium, Saturday, April 5, in room 213 in Cartwright Hall. The topic
will be “The Forgotten Constitutional Amendments.”

Scholars will discuss how and why the Ninth and 14th Amendments are
considered to be largely forgotten amendments.

They will also explore how the Supreme Court has rarely
addressed these amendments when deciding cases.

“The Ninth Amendment and 14th
Amendment Privileges or Immunities Clause seem, by their language, to be
possible provisions that make sense for the court to use in discussing
individual rights. Mysteriously, however, the court has rarely discussed those
clauses.

“This conference will explore
the reasons why the court has hesitated to rely on those provisions, and
whether anything is likely to change in the future. The conference will
therefore shed light on some of the most important and controversial political
issues of our time such as abortion and homosexuality,” he added.

Symposium draws scholars from across the nation

Mark Kende, the James Madison chair in constitutional law,
will moderate the discussion on both amendments.

The following guest scholars will discuss the Ninth
Amendment from 8:30-10:30 a.m.:

In addition, the following professors will present topics
relating to the Privileges or Immunities Clause of the 14th Amendment from
10:45 a.m. to 12:15 p.m.:

The symposium is made possible by funding from the law firm
of Belin, Lamson, McCormick, Zumbach, Flynn PC.

Register for the symposium

Cost is $10 per person. The symposium is open to the public
and free for those affiliated with Drake and the Belin law firm.

For an additional $10, attendees will receive a copy of the
Drake Law Review, which will include proceedings from the symposium.

The symposium has been approved for four hours of Iowa and
federal CLE credit.

Read more about the Constitutional Law Center and its
director online.