Davidson’s gift will revamp the lab that was originally
established in his honor in 1997. It will provide students in Drake’s College
of Pharmacy and Health Sciences with the most up-to-date resources to master
their laboratory skills before entering the work force.

Plans for the renovation will change the space to better
resemble a pharmacy practice setting. The renovated lab will also allow
students in different levels of the pharmacy program to share a common
laboratory and collaborate, no matter their experience or expertise. The lab is
scheduled to be completed by spring 2009.

The updated lab will help the college continue to meet the
evolving standards set by the Accreditation Council for Pharmacy Education for
the education of pharmacists, providing students with the opportunity to
develop critical thinking and problem-solving skills in the laboratory
experience.

“It gives me a great deal of satisfaction to make this
gift possible,” said Davidson, a resident of Laguna Niguel, Calif.
“Pharmacy education at Drake is outstanding and ranks among the best
anywhere in the United States. I am confident the renovated Pharmacy Practice
Laboratory will allow our students to excel in this critical and practical part
of their education.”

A longtime Drake benefactor and member of the Board of
Trustees since 2003, Davidson graduated from Drake in 1950 with a bachelor’s
degree in pharmacy. After graduation, he practiced community pharmacy in
Illinois and then served in the Army as a hospital pharmacist at Walter Reed
Army Medical Center.

In 1955 Davidson launched a distinguished 32-year career
with Abbott Laboratories, where he excelled in numerous positions in sales and
marketing and as director of field sales for the Hospital Products Division.
While working full-time at Abbott, Davidson earned a master’s degree in
business administration from the University of Chicago’s Graduate School of
Business Executive Program.

He has received many honors, including Drake’s Alumni
Loyalty Award, the Alumni Achievement Award from the college and the Lawrence
C. and Delores M. Weaver Medal of Honor.

Davidson chaired the Drake President’s Circle for two years
and has been a member of the National Advisory Council for the College of
Pharmacy and Health Sciences for several years.

Drake University Trustee Frances
Kinne, FA’40, GR’44, chancellor-emeritus of Jacksonville University, recently
was honored at the Fifth Annual Turknett Leadership Character Awards Luncheon
in Atlanta. She received the Inspiration Award, a special award honoring her
lifelong contributions as a role model for leadership character in higher
education and in life.

The awards recognize individuals
who demonstrate unquestioned integrity, who treat their customers, suppliers
and each other with respect, and who maintain a culture in which everyone takes
responsibility for achieving results and upholding their core values.

Kinne, a native of Story City, Iowa, is chancellor emerita and past president of Jacksonville University, Jacksonville, Fla. She was honored by Drake with an honorary Doctor of Fine Arts degree in 1981. The Frances Bartlett Kinne Alumni and Development Building on the Drake University campus is named in honor of her.

The awards are hosted by Turknett
Leadership Group in partnership with Kennesaw State University’s Siegel
Institute for Leadership, Ethics and Character, and are sponsored by KPMG and
Crawford & Co.

It takes a village to recruit a university class. At Drake,
those “villagers” include alumni and parents who host receptions in
their homes for admitted students and their families.

The events are powerful tools for motivating students to
enroll at Drake. Last year, of the admitted students who attended home
receptions, more than 70 percent enrolled at Drake – by far the best
“matriculation rate” for the University’s admission programs.

Drake
alumni and parents are hosting 16 home receptions this year in January,
February, and early March. The University is grateful to these dedicated Drake
hosts:

If
you were a member of a social sorority or fraternity while you were a Drake
student, consider this your invitation to get involved in planning Drake’s
All-Greek Reunion in April 2009, in conjunction with the 100thrunning of the Drake Relays.

We
are seeking representatives of every Greek organization that has had a chapter
at Drake as well as ideas for reunion activities.

Should
we have a “Greek Idol” version of an alumni Sweetheart Sing?
Competitions to see which organization can get the most alumni on campus for
the fun?

This
is your reunion, so let’s make it memorable. Contact Barb Dietrich Boose,
director of alumni and parent programs, at 515-271-3077 or
barbara.boose@drake.edu.

This
year, several sororities and fraternities will host Relays events for alumni; watch
future issues of “eBlue” and the Drake alumni Web site for updates. To date:

The honorees were selected based
on their service to the College of Pharmacy and Health Sciences, distinction in
their careers and recognized civic and community contributions.

Fix, a resident of Haltom City, Texas, is president of Jen-Rx Inc. and owner of the Medicine Shoppe in Halton City. In addition, she is a consultant and instructor for Technician Training.

Lawton, a resident of Englewood,
Colorado, is vice president of business
development and physician services at Littleton Adventist Hospital.

Lawton is a fellow with the
American Society of Health-System Pharmacists and was named Pharmacist of the
Year by the Colorado Pharmacists Society in 2006.

Sohl, a resident of Corpus
Christi, Texas, is a lieutenant of the Medical
Service Corps for the U.S. Navy. He previously received the Navy and Marine
Corps Achievement Medal.

Sohl also was named the Navy
Junior Pharmacist of the Year in 2006. He now serves as the head of pharmacy at
the Naval Hospital Corpus Christi, as well as on the Navy Pharmacy Advisory
Board.

Bruce Foster, BN’78, shared his expertise with the Drake
community on the sub-prime mortgage market by offering solutions for the
future.

“These solutions might help us not repeat the mistakes
of the past, and avoid unintended consequences,” he said during the recent
Executive in Residence Lecture.

His suggestions for consumers and lenders were to:

Foster also discussed the history of the sub-prime mortgage
mess.

“Lenders’ corporate memory has failed,” he said.
“They have failed in the past and they are failing this time.”

Foster’s speech proved valuable for first-year student Byron
Spears. “I liked how he explained the complexities of the housing crisis
and how past trends will affect the future,” said Spears, a management
major from Kansas City.

In conjunction with the lecture, Foster spoke in several classes and had lunch with students.

Foster founded his own consulting practice in 2007. The company caters to corporate treasury functions and mortgage banking and deals company deals with financial engineering issues for the financial services industry. 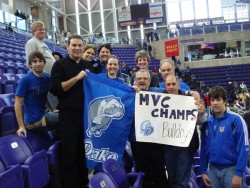 When the Drake men’s basketball team became the 2008 Missouri Valley Conference championships after defeating the University of Northern Iowa Feb. 16, hundreds of Drake fans were there to celebrate. 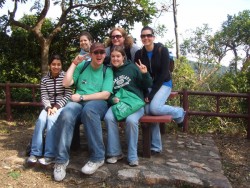 You can view more photos of alumni and campus events in Drake’s online photo galleries.

The School of Education honored three outstanding alumni at the school’s annual Alumni Awards and Senior Recognition Dinner on Feb. 28.

The award recipients were:

•    Hope Bossard, GR’93, ED’00, director of curriculum and school improvement for Gilbert Community Schools and adjunct professor of education at Drake University. A resident of Radcliffe, Iowa, Bossard received her master’s and specialist degrees in education from Drake.