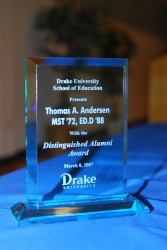 The event, which was open to the public, began with a reception
at 6 p.m. in Parents Hall in Olmsted Center, 2875 University Ave.,
dinner at 6:30 p.m. followed by remarks by School of Education Dean Jan
McMahill and Ferrare’s speech at 7 p.m.

•    Hope Bossard, director of curriculum and school improvement
for Gilbert Community Schools, as well as an adjunct professor of
education at Drake University. A resident of Radcliffe, Iowa, Bossard
received her master’s and specialist degrees in education from Drake.

The event also honored members of the school’s undergraduate
class of 2008. Each student was recognized and received a gift from
the college.

“While at Drake University, Ferrare provided leadership to faculty
and staff in the School of Education in a time of great transition in
education,” McMahill said. “He was an advocate for improved public
policy and an expert strategic planner.”

As president of Academic Search, Inc., he directs searches for
presidents, vice presidents and deans for both private and public
universities and colleges, including church-affiliated schools and
independent liberal and fine arts institutions.

Prior to joining Academic Search and Drake University, Ferrare
served as associate executive director of the School Administrators of
Iowa. He also has taught elementary and middle school.