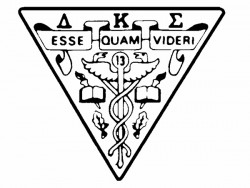 After its closing in the early ’90s, the Drake chapter of the Lambda Kappa Sigma pharmacy fraternity, was reinstated recently, thanks to Drake students.

Roommates Erin McCleeary, P2, and Rachel Althoff, P2, now co-presidents of the Nu chapter of the fraternity, had researched pharmacy fraternities and decided that another fraternity would benefit students.

“I looked into rushing the other fraternities on campus and they did not fit my personality,” she said. “I wanted another alternative.”

Last year, Althoff and McCleeary, along with Catie Brackin, P2, and Karen McManus, P2, began petitioning to reinstate LKS and raise awareness of the fraternity, which originally made its appearance on campus in 1925. Althoff, Brackin and McManus attended the LKS regional meeting in Philadelphia over the summer to meet national members and to get ideas for the chapter.

In its first semester, at the beginning of November, the fraternity inducted 23 members.

One Drake alumna, Gloria Bernstein, PH’78, still an active member of LKS, praises the fraternity and her experiences.

“My experience with LKS was exceptional,” Bernstein said.

Bernstein, a Des Moines resident and pharmacist for Hy-Vee, is
involved with the fraternity’s education trust committee, the
nominating committee and the budget and finance committee.

Bernstein said she hopes everyone who joins the fraternity will
have a similar experience to hers while she was at Drake. “It shaped me
and promoted my personal and professional growth. It has given me the
opportunity to be a better person and pharmacist.”

In addition, McCleeary said the Drake community has been a huge
support to the fraternity. “It was great to see everyone come together
for a common cause. The other fraternities have been helpful in giving
us suggestions,” she said.

McCleeary and Althoff hope to see the fraternity get involved with
groups in the community such as battered women’s shelters, Relay for
Life and various walks to support diabetes research and fight breast
and cervical cancer. The national philanthropy for the fraternity is
Project Hope, a group that travels to countries in distress to provide
clothing, food and shelter to those in need, especially children.

“I hope we can get to the point where we can take all opportunities
given us and eventually become a top chapter nationwide,” McCleeary
said.

“LKS is an international, professional pharmacy fraternity open to
undergraduate and graduate pharmacy students and practicing
pharmacists. It is dedicated to developing the intellectual,
leadership and professional skills needed to maximize member’s
potential and strive for their personal best. LKS promotes professional
growth and enhances professional development in the field of pharmacy,
with an emphasis placed on women’s health issues.”

The College of Pharmacy and Health Science also has two other
professional fraternities, Kappa Psi, and Phi Delta Chi.