Role of Media in Campaign Coverage Examined by Panel, Community 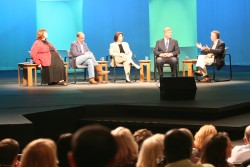 Members of the public gave up-and-coming political reporters their two cents’ worth Monday at “Politics and the Press: A Community Conversation,” offering questions and opinions on issues ranging from veterans’ health care to fair coverage of the presidential hopefuls.

A panel of four experts fielded challenging questions, discussed the role of the media in covering the Iowa caucuses and addressed audience concerns about how reporters might more effectively cover the 2008 presidential campaign.

“Journalism serves a unique and essential role in our society. Journalism is a linchpin of our democracy. It is for that reason that we think it’s important to focus intensely on this intersection between politics and the press,” said Bob Steele, the Nelson Poynter scholar of journalism values at the Poynter Institute in St. Petersburg, Fla.

Approximately 200 people attended the event, which was organized by Drake University’s School of Journalism and Mass Communication, the McCormick Tribune Foundation, the Poynter Institute and The Des Moines Register. Iowa Public Television recorded the discussion at its Johnston studio and will air an hour-long program about it at 7 p.m. Thursday, June 28, on both its analog and digital channels.

Rosenstiel led the first half of the evening’s discussion with questions about equal campaign coverage, the presentation of central issues, the role of the media in the community and the resources available to journalists for covering the Iowa caucuses.

“The media face a very difficult challenge at this time,” said Vilsack, who briefly was a candidate for the 2008 Democratic presidential nomination. “It is my belief that the media do not have substantial enough resources to do all the work that needs to be done at this critical time in our country. There’s also a challenge from the Internet. Our generation is using mainstream media less and the Internet more. It’s sometimes difficult to discern fact from fiction on the Internet, but it certainly has a viral impact.”

Panelists also discussed the reporter’s dual role as objective stenographer and guardian of the Constitution.

“The press not only should have a fundamental role in discovering and searching for truth, but I think they should ask themselves, ‘How am I healing rifts that are in society?'” Dowd said. “And not just saying, ‘candidate A says X, candidate B says Y, they’re in conflict, we’re going to cover the conflict,’ but in some way figuring out a way to do their part in trying to bring people together and trying to heal the community.”

That sparked a key question from Rosenstiel: “Are we in a moment where our traditional role as reporters needs to change?”

Washburn and the other panelists agreed that journalists do have a substantial role in shaping the way people feel about politics, but contended that the news media should strive to be objective rather than moral referees.

“I think that a lot of the citizens do feel a lot of the anxiety and discomfort that you’re talking about, and I think we do have the responsibility to address that,” Washburn said. “But I don’t think that means that we become boosters and ignore conflicts that exist. I don’t think it’s an either/or situation. I like to think that the way we go about that is to cover solutions and ideas … When there are decisions to be made about health care or biofuels or No Child Left Behind, our job is to help people get information and points of view that help them make decisions.”

Despite the heated discussion among the panelists, they agreed that, as the Iowa Caucuses approach, the news media will be instrumental in guiding the discussion of important issues. More than an hour of feedback from educators, former politicians, biofuel workers, journalists and other citizens indicated that the evening’s discussion was only the beginning of a much wider community conversation.

The journalists who attended the event are in Iowa for a program of workshops and seminars June 5-6 at Drake University. That program, designed to help improve news coverage of the presidential campaign, is presented by Drake University’s School of Journalism and Mass Communication and the Poynter Institute. The McCormick Tribune Foundation is sponsoring the program with additional support from The Des Moines Register and Iowa Public Television.