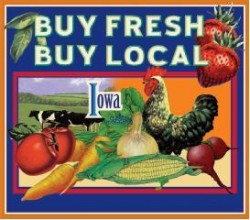 Wellmark Blue Cross and Blue Shield is providing major sponsorship for the campaign to help consumers connect healthy eating with wellness. “We are excited to have such a well-known Iowa health care company play a significant role in this year’s campaign,” said Matt Russell, BFBL coordinator and state food policy project coordinator at the Agricultural Law Center. “We look forward to using this year’s Buy Fresh Buy Local campaign to focus on the health benefits of fresh and local foods.”

Judging by the successful opening weekend of the Des Moines Farmers Market that attracted more than 30,000 shoppers, Russell says the trend seems to indicate a positive upswing in the public’s awareness and interest in fresh, local food, especially compared to the original launch of the Buy Fresh Buy Local campaign in 2004. “There’s a lot more life to the campaign in Iowa now, which indicates a real opportunity for Drake to sustain the program into the future,” Russell said.

The membership fee was $30 for each farm and $100 for businesses, but thanks to support from the new Gateway Market in Des Moines that opened in May, farmers had the chance to apply for scholarships to defray this cost. Drake mailed an invitation to participate to more than 200 farms, but membership was open to anyone whose farm or local business aligns with the goals of the campaign.

The staff at the Drake Agricultural Law Center, which includes marketing and law student interns, are in the process of printing and will distribute 60,000 directories as well as regularly participate at the Downtown Des Moines Farmers Market on Saturday mornings and other local farmers markets during June, July and August. In addition, Drake will conduct consumer outreach and provide a range of Buy Fresh Buy Local promotional materials to help farms, restaurants, retailers and food processors identify with the campaign.