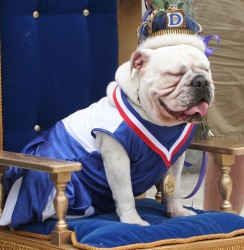 Fifty contestants sporting whiskers, wrinkles and wagging tails will compete in the 28th annual Beautiful Bulldog Contest to kick off Drake Relays Festival Week on Monday, April 23, at Nollen Plaza, Third and Locust streets in downtown Des Moines. The winning bulldog will serve as Drake University’s mascot for the 98th running of the Drake Relays April  26-28.

Making his first public appearance at the Beautiful Bulldog Contest will be Hank, a puppy born Dec. 27, 2006, to Hannah, last year’s winner, and Tiberius, winner of the 2005 contest, as part of a litter of seven.

Hannah’s owners — Amanda Millard and Curtis Jackson of Des Moines — say they plan to bring Hannah and Hank to the contest and they’re hoping to enter Hank in the competition. “He’s a very handsome little guy,” Millard adds. “He charms everyone with his good looks and he loves to play and chew on everything. I think he’s inherited Hannah’s taste for shoe leather! We’d love to see him follow his parents’ paw prints and take the crown at the Drake Relays Beautiful Bulldog Contest.”

“This year we have received inquiries for the Beautiful Bulldog Contest from six different states,” said Dolph Pulliam, director of community outreach and development at Drake. “Bulldogs and their owners will come dressed in a variety of amusing and colorful costumes clearly aimed at impressing the judges.”

accepted. The deadline for submitting entries is April 17. Entry forms may be downloaded at https://wwww.drakerelays.org/ by clicking on the link at the bottom of the left side of the screen for the Beautiful Bulldog Contest. Forms also may be obtained by calling Nancy Strutzenberg at 515-271-4539. Additional information is available on the Beautiful Bulldog hotline at 515-271-2888.