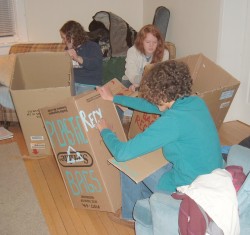 Trash in the commons, exotic animals and fair trade coffee are some of the features that the Drake Environmental Action League (DEAL) will use during Earth Week, April 16-20, to promote environmental awareness at Drake University. Daily activities throughout the week aim to keep Drake students focused on local and global environmental issues. A complete schedule of activities follows.

• Trash Helmick: Monday, April 16, Helmick Commons, the field between Meredith Hall and Hubbell Dining Hall. Kicking off Earth Week, volunteers from the Residence Hall Association and Drake Democrats will spend the day getting down and dirty with DEAL. Students will sort a weekend’s worth of trash from the freshman residence halls. Pop cans, bottles, cardboard and more recyclables will provide a visual demonstration of the benefits of recycling on campus.

• The Refugee’s Road: Thursday, April 19, Helmick Commons. Co-sponsored by the Coalition of Black Students and the International Students Association, which will work with the United Nations High Commission for Refugees (UNHCR) and DEAL, this event is designed to raise awareness on Drake’s campus about the hidden impacts of war on refugees as well as on the environment. A refugee tent will be set up in Helmick Commons, showing students the physical reality that a family of five refugees faces daily. Community representatives from the UNHCR will raise money for the distribution of tents to refugee populations in Afghanistan and Darfur. In an act of solidarity, students will also use sidewalk chalk to illustrate why peace and nature are important to them as they “chalk” campus with murals, facts and quotes.

• Fair Trade Friday: 2 to 6 p.m. Friday, April 20, Cool Beans, above Hubbell Dining Hall, 1315 30th St. Earth Week concludes with a talk by Larry James, owner of Mars Cafe, who will discuss the importance of fair trade coffee products for social and environmental justice. Students will also be invited to sample fair trade coffee varieties donated by Mars Cafe. Co-sponsored by the Panhellenic Council and La Fuerza Latina, this event will encourage people to think about how local purchases impact the global environment on a daily basis.

“With these events, DEAL will endeavor to educate participants about the human costs of environmental indifference and to inspire them to reach their full potential as members of the natural world,” said Mara Brettner, president of DEAL. “We believe the diversity of these events will involve a wide variety of students and everyday citizens and expand the existing network of environmentally conscious people in the Drake community.”

Huckabee to Speak at Drake-IowaPolitics.com Lunch