Legal Scholars to Debate Whether the U.S. Constitution Thwarts Democracy 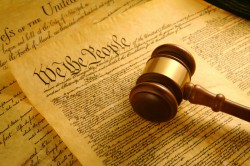 The annual event, titled “Our ‘Undemocratic’ American Constitution,” is set for Saturday, April 7, with activities beginning at 8 a.m. in Cartwright Hall, 27th Street and Carpenter Avenue. Legal scholars from across the nation will address ideas aimed at reinvigorating democracy in the nation, including the prospect of altering the Constitution. Former Iowa Gov. Tom Vilsack, Drake visiting distinguished professor of law, will deliver the keynote address, titled “Reflections of a Participant on American Democracy and the Constitution.”

The symposium’s topic is rooted in the premise that American democracy is at a crossroads. After all, the electoral college allows a candidate who failed to earn a majority vote to become president; our representative system distributes an equal number of senators to Wyoming as California; and the president’s veto can halt the will of the majority. In an era when scandals in Washington and faulty voting procedures are the norms, many citizens have become increasingly disillusioned — and some say little can be done to change the gridlock facing the government. Perhaps even the Constitution contributes to the problem.

Mark Kende, the James Madison chair in constitutional law and director of the Drake Constitutional Law Center, will moderate the event. Presenters are listed below:

• Sanford V. Levinson, the W. St. John Garwood and W. St. John Garwood Jr. centennial chair in law and professor of government at the University of Texas Law School, is regarded as one of the most prolific scholars in academia. He holds a B.A. from Duke University, a Ph.D. from Harvard and a J.D. from Stanford Law School. He has authored more than 250 articles and book reviews as well as four books. His first book, “Constitutional Faith,” won the Scribes Award in 1988. Most recently, he authored the book that inspired this symposium, “Our Undemocratic Constitution: Where the Constitution Goes Wrong (and How We the People Can Correct It).”

• Saikrishna Prakash, the Herzog research professor of law at the University of San Diego School of Law, received his B.A. from Stanford University and his J.D. from Yale, where he was editor of the Yale Law Journal and a recipient of the John M. Olin Fellowship in law, economics and public policy. He has served as law clerk to Judge Laurence H. Silberman of the U.S. Court of Appeals for the D.C. Circuit and to Justice Clarence Thomas of the U.S. Supreme Court. He has published numerous important articles on subjects such as executive power and foreign relations.

• Heather Gerken, professor of law at Yale Law School, earned a B.A. from Princeton University and graduated from the University of Michigan Law School. She subsequently clerked for Judge Stephen Reinhardt of the U.S. Court of Appeals for the Ninth Circuit and Justice David H. Souter of the U.S. Supreme Court. After practicing for several years at a firm specializing in constitutional litigation and election law, she joined the faculty of Harvard Law School in 2000 before moving to Yale in 2006. Gerken teaches and writes in the area of election law and constitutional theory.

• Neal Devins, the Goodrich professor of law and government and director of the Institute of Bill of Rights Law at William and Mary Law School, joined the faculty in 1987 after serving as assistant general counsel for the U.S. Commission on Civil Rights and project director for the Vanderbilt Institute for Public Policy Studies. He received his B.A. from Georgetown University and his J.D. from Vanderbilt Law School. He is the author of “Shaping Constitutional Values: The Supreme Court, Elected Government and the Abortion Dispute.” He is co-author of the “Political Dynamics of Constitutional Law and Federal Abortion Politics” and edits the book series “Constitutional Conflicts.”

• Donald Horowitz, the James B. Duke professor of law and political science at Duke University, is the author of six books, including “The Courts and Social Policy,” which won the Louis Brownlow Award of the National Academy of Public Administration; “Coup Theories and Officers’ Motives;  Sri Lanka in Democratic Perspective; and A Democratic South Africa? Constitutional Engineering in a Divided Society,” which won the Ralph Bunche Prize of the American Political Science Association.  He is president of the American Society for Political and Legal Philosophy.

Registration is limited and costs $10 per person (free for individuals affiliated with Drake and the Belin law firm), which covers admission to the symposium and a continental breakfast. For an additional $10, attendees can receive a copy of the Drake Law Review issue that includes the symposium proceedings.

Congress created the Constitutional Law Center to commemorate the bicentennial of the Constitution in 1987. Drake Law School is one of only four law schools designated by statute to receive a permanent endowment “to encourage graduate study of the American Constitution, its roots, its formation, its principles and its development.”

New York Artist to Discuss Generating an Audience for Art