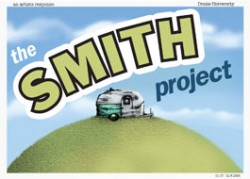 Students in Angela Battle’s painting class recently found inspiration in the research of another instructor: Dina Smith, assistant professor of English. Smith visited the class to share her research on trailer culture and Cold War cultural theory. According to Smith, trailers were once associated with leisure, travel and luxury, but came in the 1950s to stand for substandard middle-class housing.

“Trailers also challenged the stability of Cold War surveillance,” said Smith, who explained that the mobility and diversity of trailer-dwelling populations made them suspect. Trailer parks were seen as the antithesis of stationary, ordered suburbs. Even President Hoover demonized trailer parks, and many texts of the period portrayed them as shady or dangerous.

Students responded to Smith’s hour-long presentation by creating works of visual art, which will be displayed in a free exhibition. The exhibition, titled “The Smith Project: An Artist’s Response to the Work of Prof. Dina Smith,” runs from Nov. 17 through Dec. 8 in the Weeks Gallery in the lobby of the Harmon Fine Arts Center, 25th Street and Carpenter Avenue. There will be an opening reception from 5 to 7 p.m. Friday, Nov. 17. Both the reception and exhibition are free and open to the public.

Gov. Vilsack to Give Keynote Speech at Drake Conference

Drake Project Focuses on Reducing Meth Use in Teens