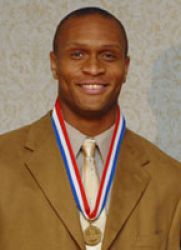 WASHINGTON, D.C. — Stacey Walker, a freshman defensive back on the Drake University football team, has been named Boys and Girls Club of America National Youth of the Year.

In addition to the title, Walker, who was honored at a Congressional Breakfast held this morning in the Dirksen Senate Office Building, will receive a $15,000 scholarship from the Reader’s Digest Foundation and the opportunity to meet the president of the United States.

The Youth of the Year program, which has been nationally sponsored by the Reader’s Digest Foundation since 1947, recognizes outstanding contributions to a member’s family, school, community and Boys & Girls Club; academic excellence; and personal challenges and obstacles overcome.

Walker, a business law and communications major at Drake, is scheduled to throw out the first pitch at the Washington Nationals baseball game tonight against the Atlanta Braves.

He will appear on the 7:30 a.m. (Iowa time)segment of Thursday’s NBC “Today” show. On Friday, Walker and the other regional finalists are tentatively scheduled to meet President George Bush at 10 a.m. (Iowa time).

“I’m deeply honored to receive this award,” Walker said. “I’m really overwhelmed. I can’t really put into words how I feel right now. This whole week has been quite an experience.”

Walker, who earned all-conference honors in football and track as a senior at Washington High School in Cedar Rapids, Iowa, has been in Washington, D.C., since Monday. He has been participating in a series of one-on-one interviews with judges, while meeting with senators and congressmen from Iowa.

“I am absolutely thrilled for Stacey Walker,” said Drake football coach Rob Ash. “He is exceptionally articulate and poised, but more important, he deserves this award for the way he has reacted to, and triumphed over, some very difficult childhood experiences. All of his coaches and teammates in the Drake University football program are excited and impressed with this fantastic accomplishment.”

“I’m very proud of the accomplishments of Stacey and all the nominees, “said Roxanne Spillett, president of BGCA. “We’ve now selected 60 National Youths of the Year thanks to the Reader’s Digest Foundation, and as we move into our next century of service, I’m looking forward to seeing the great results the Youth of the Year program will continue to deliver.”

In order to compete for this prestigious national honor, Walker, as well as the four finalists, garnered the Youth of the Year title at their respective local, state and regional levels.  The other finalists were Kelly Barefield (Seattle, Wash.), Alyse Eady (Fort Smith, Ark.), Montorie Lee (Camilla, Ga.) and David Shelly (Pittsburgh).  The Reader’s Digest Foundation awarded each state finalist a $1,000 college scholarship and each regional finalist a $10,000 college scholarship.

Walker’s loss of his mother at the age of 4 was definitely a tragedy, but the wisdom and strength of his grandmother carried him through, shaping him into a stellar young man.

The Boys & Girls Club of Cedar Rapids also provided a means for Walker to excel.  He started out as a member, but quickly transitioned into a mentor, role model and staff member.  Through Passport to Manhood, a program that teaches young boys how to become responsible young men, he helped others escape their dim surroundings in hopes of pursuing a brighter future.

In addition to being an avid football player at his alma mater, Washington High School, Walker excelled in academics and was very active in student government and the debate team.  He was presented with the Martin Luther King Jr. Award and selected as member of the National Council on Youth Leadership.

Moreover, Walker used his athletic talents to help those in his community by coaching and starting the Student Athlete Mentoring program, in which he and other athletes mentored at-risk youth in the areas of sportsmanship, academics and everyday life.

As the founding sponsor of the Youth of the Year program, the Reader’s Digest Foundation has given nearly $8 million to BGCA and 60 teens have been selected as National Youth of the Year.The program recognizes outstanding contributions to a member’s family, school, community and Boys & Girls Club, academic excellence, as well as personal challenges and obstacles overcome.

Chill Out with Ben & Jerry at Bucksbaum Lecture Oct. 3