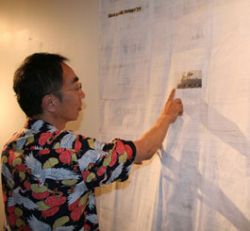 Yoji Matsumura scans a newspaper spread for familiar content. He identifies a photo of soldiers deploying from an attack helicopter and whitewashes everything around it. Then he moves to another sheet of newsprint, scans and whitewashes all but a woman’s torso. On the next, he spares a headline in Arabic.

He’s not seen these images before, and he can’t read Arabic. The content is familiar because of the way it makes him feel, the memories it triggers.

He attaches the spreads – dozens and dozens of them – and hangs them like giant curtains from the walls of Drake University’s Anderson Gallery, where they’ll be displayed in an installation titled “Lost and Found” Sept. 8 – Oct. 13.

The effect is surreal. The gallery walls become an ocean of dissociated images and words.

One wonders what Matsumura is trying to ‘say’ with such a massive and intricate project.

“I’m not interested in making a statement,” Matsumura says. “The segments are not connected in a logical way; my decisions are intuitive. But sometimes they come together to create some sort of larger image, almost like a movie image – a story. I’m trying to spark memories, my own and those of the viewer, and the feelings of events.”

Matsumura grew up in Tokyo, Japan, and came to the United States to study sculpture. He attended the Cranbrook Academy of Art in Bloomfield Hills, Michigan, for his undergraduate degree and went on to receive his master’s at Virginia Commonwealth University in Richmond, Virginia.

While studying at VCU, Matsumura created his first installation.  The night before a faculty review, he had nothing to show. Scrounging for materials, he made one installation from a wash basin, six-foot steel pipe, metal sheet, tin can and some spring coils. He set one spring coil beneath each corner of the metal sheet, placed the wash basin on top of the sheet, stuck the steel pipe into the wash basin and hung the metal can from the pole. Water dripped six feet from a hole in the can into the basin, also filled with water.

For another installation he laid out newspaper spreads, circled interesting headlines with red pen and covered the rest with dirt.

The next morning Matsumura’s professors gave his steel installation rave reviews. They admired his original use of familiar objects. But as for his newspaper piece – “They didn’t even look at it,” Matsumura says.

Undaunted and having learned a lesson about connecting with his audience, Matsumura decided to focus his work on installations. He designed them on a larger scale, added some found objects and showcased his work in galleries around the world. His last installation was in Korea, where he garnished the display with a tall 3-D centerpiece onto the sides of which was projected the image of a child.

For the Anderson Gallery installation, Matsumura bought an inflatable globe at a garage sale. It’s inscribed in silver pen with best wishes from several unknown people. Matsumura paid 10 cents for it. The installation will include more items from Des Moines, but Matsumura is still searching for them at local thrift shops and garage sales.

Matsumura will reveal his latest work at the installation’s opening, 5 to 7 p.m. Friday, Sept. 8, at the Anderson Gallery in the Harmon Fine Arts Center, 25th Street and Carpenter Avenue. The installation continues through Oct. 13. Gallery hours are noon to 4 p.m. Tuesday through Sunday. Admission is free. For more information, call 515-271-1994.