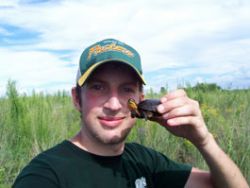 “I reached into the trap for the turtle and right away I saw it was a Blanding’s. It had a bright yellow neck with a lot of yellow spots on its head,” Vogel said. “It was a real surprise; I would never have guessed it would have been there.”

Blanding’s are classified as threatened in the state of Iowa, meaning they are at risk of becoming extinct. It is illegal to collect or kill them.

“There was just the one, but because it was a yearling and Blanding’s turtles are pretty sedentary you can bet that there’s an older male and female and perhaps other nestlings nearby,” said Keith Summerville, assistant professor of environmental science at Drake, soon after the find.

He was right – the next week, Vogel found another young Blanding’s.

The turtles are “usually found in shallow ponds or wetlands with lots of emergent plants such as reeds, duckweed and sandy soils,” according to Summerville.

“Finding a population of Blanding’s at Chichaqua Bottoms tells us that the large restored landscape is really working to provide habitat for declining species,” Summerville said.

The Chichaqua Bottoms Greenbelt spans more than 10 miles of land in northeast Polk County and includes more than 500 acres of restored wetland area along the Skunk River.

While Blanding’s are certainly rare, estimating their total population is difficult, said Daryl Howell, zoologist for the Iowa Department of Natural Resources.

Prior scientific surveys in Iowa had turned up the turtles, but never evidence of their reproduction. That’s disconcerting, especially with a threatened species like Blanding’s.

“This is a very significant find, because the yearling is proof of reproduction,” Howell said.

Iowa has lost approximately 98 percent of its wetlands in the past 200 years, according to a study by the Center for Agricultural Development at Iowa State University. In 2000, the center estimated that Iowa had about 35,000 acres of wetlands – as compared to an estimated 2.3 million acres in 1750.

Vogel measured the age and size each turtle (yearlings, the first 6 inches and the second 4.5 inches) and quickly released it.

He said he’d been keeping his eye out for Blanding’s, as well as two endangered species of snake – the Smooth Green and Grahams Crayfish – all summer. Retired Drake biology professor James Christiansen once tracked the three endangered species. Vogel says he probably won’t see the snakes, but he’s confident that the team will find more Blanding’s.

“We’re going to set up more traps over at a pond close by, and I’d say the chances are pretty good that we catch an adult pair. At least I hope so,” Vogel said.

Students worked on projects ranging from the study of environmental estrogens to the development of a science-based addition education program for high school students that uses video game development and virtual reality technologies.

Vogel said he’s enjoyed his work with the program. “It’s been a real relaxing summer – sometimes it’s really hot, and you’re in these waders that aren’t very cool, and there’s lots of bugs, but we’ve done a lot of good work and had a lot of fun.”