Drake’s Newspaper Finishes Above the Fold in National Contest 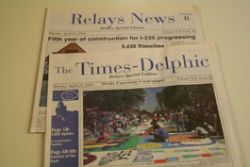 The Associated Collegiate Press recently recognized Drake University’s student newspaper, The Times-Delphic, as one of the nation’s top college publications.

“We were in with a pretty big group of heavy competitors,” said Erin Delahanty, who served as The Times-Delphic’s editor in chief when the Relays issue was written.

The ACP’s Best of Show awards is an on-site competition open only to publications that have staff members attending the workshops. Representing Drake at the event were 2006-07 Editor in Chief Alissa Cunningham and Managing Editor Kathy Nowacki.

Delahanty said the 86-page Relays edition was the culmination of many months of hard work and planning. More than 30 writers contributed content to the publication, which included a special six-page pullout section in celebration of Drake’s 125th anniversary.

Also new to the 2006 issue was the complete reworking of its Speed section, which provides an in-depth look into places of interest in Des Moines, the addition of a student designer to the staff and the conversion to a much larger paper format. The Times-Delphic upgraded from tabloid to broadsheet format – the largest of all newspaper formats – early in the 2005-06 school year.

Kathleen Richardson, faculty adviser for the paper, said the Relays issue was “the crowning achievement of the school year for The Times-Delphic staff,” and that she was “proud of all the people who spent a tremendous amount of time and effort into producing a publication that people enjoyed looking at.”

Delahanty, who will be a senior this fall, said the hard work was worth the return. “It was really rewarding to see our hard work pay off and find out that we can compete with other schools and their newspapers.”

Drake Moves Up in U.S. Rankings as a Best Value