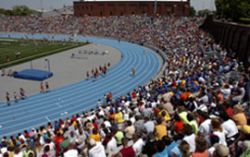 Drake University is among six schools that have been notified that they are finalists for hosting the 2008, 2009 and 2010 NCAA Track and Field Outdoor Championships.

Earlier, Drake was awarded the 2007 NCAA Midwest Regional Outdoor Track and Field Championships with school president David Maxwell making the announcement during the dedication ceremonies for the revitalized Drake Stadium at the Drake Relays on April 29. The NCAA Regional Championship, which draws as many as 1,100 athletes, is scheduled for May 25-26, 2007.

“The capacity to host major regional, national and international track and field events was a central factor in the revitalization of Drake Stadium, and the design and implementation of the project were carried out with events such as the NCAA Track & Field Championships in mind,” President Maxwell said. “We now have a world-class facility with a fast track that meets the highest international standards — a facility that, thanks to the Drake Relays, is hallowed ground in the world of track and field.

“With nearly a century of experience in hosting the Relays, staff members who are nationally recognized for their expertise in managing these events, a dedicated and experienced corps of volunteers, a fan base that has filled Drake Stadium at Relays every year for decades, our location in the center of the country with easy access by road and air, and broad-based community support for our bid to host the NCAA Championships, I believe that we are the perfect venue for a highly successful series of Championships.”

Drake and the city of Des Moines, will be vying with Sacramento, Calif.; Eugene, Ore.; Fayetteville, Ark.; Austin, Texas; and Baltimore, Md., to host the NCAA Track and Field Championships for a three-year period beginning in 2008. A final decision is expected this September. Drake last hosted the NCAA Outdoor Track and Field Championships in 1970.

“Greater Des Moines is a ‘championship community!’ Add that to our newly renovated Drake Stadium and the world-class athletes who have run the Drake Relays for nearly 100 years and we have one heck of a package to sell to the NCAA Track & Field Committee,” said Greg Edwards, president and chief executive officer of the Greater Des Moines Convention & Visitors Bureau. “We have hosted numerous other championship events in this community, however, this event will definitely put Des Moines on the map of the prestigious NCAA.”

The 81-year-old Drake Stadium underwent a $15 million renovation that began in May of 2005 and finished just hours before the first starter’s pistol fired during the 97th running of the Drake Relays April 26.

It drew rave reviews from fans, coaches and athletes during the Drake Relays. “They did a great job,” said two-time 2004 Olympic gold medalist Jeremy Wariner. “It is a beautiful facility. Hopefully, they can hold a lot more meets than the Drake Relays.”

The newly renovated stadium includes a Mondo surface track with a safety lane that meets international standards, Musco Lighting, and a new throws venue to the north of the track for the discus, javelin and hammer throws.

One of the motivating factors for the revitalization was attracting top track and field events to Des Moines. The NCAA awards track and field championships on a 14-year cycle, meaning Drake could host a regional meet and, later, a national championship twice within that period.

Combined with the annual Relays and the girls’ and boys’ Iowa state championships, the revitalized Drake Stadium will generate as much as $300 million for the Des Moines area during the next 14 years, estimates the Des Moines Convention and Visitors Bureau.

Swing Into Jazz in July at Drake University