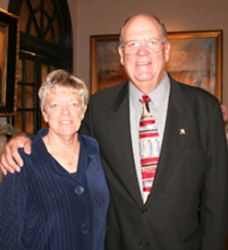 Drake University pharmacy students are gaining a state-of-the-art compounding laboratory where they’ll learn how to prepare medications that are not commercially available, thanks to a $500,000 gift from Drake alumnus Larry Mayhew and his wife, Sandy.

Pharmacy compounding — in which pharmacists make medications from scratch — is growing rapidly as demand for customized prescriptions increases to better meet patient needs. The new Mayhew Compounding Laboratory will greatly enhance opportunities for Drake pharmacy students to learn the latest techniques in compounding.

“This transformative gift will enable Drake to provide state-of-the-art facilities and an innovative curriculum that will help our graduates become entrepreneurs in the area of pharmaceutical compounding,” said Raylene Rospond, dean of the College of Pharmacy and Health Sciences.

Although the scope of the compounders’ share of the $216 billion U.S. pharmaceutical market is difficult to assess, trade groups estimate that compounding pharmacists fill at least 30 million prescriptions a year.

Drake’s new laboratory is scheduled to be completed in spring 2007 in classrooms 114 and 115 of Harvey Ingham Hall. The classrooms are being renovated and furnished with advanced compounding equipment.

“For many years it has been my privilege to serve as a preceptor for numerous Drake pharmacy students,” Mayhew said. “They often mentioned the need for an updated compounding laboratory at Drake. Sandy and I decided to make this gift so that we could enhance the students’ learning experience.”

Mayhew graduated from Drake in 1967 and worked for three years in a retail pharmacy in Chicago before moving to Phoenix to work in an independent pharmacy that he later purchased. He opened more pharmacies in the early 1980s and eventually owned six, including a compounding pharmacy and a closed-shop pharmacy serving assisted-living communities and hospices. He retired last fall after selling the last of his pharmacies — Professional Pharmacy in Phoenix.

Mayhew, a resident of Fountain Hills, Ariz., has contributed greatly to his profession, serving as president of the Arizona Pharmacists Association and the American College of Apothecaries. He also has been active in the National Community Pharmacists Association and the Professional Compounding Centers of America, which named him “Pharmacist of the Month.” He is a member of the boards of directors of numerous hospice organizations and is a longtime board member of Pharmacists Mutual Insurance Co.